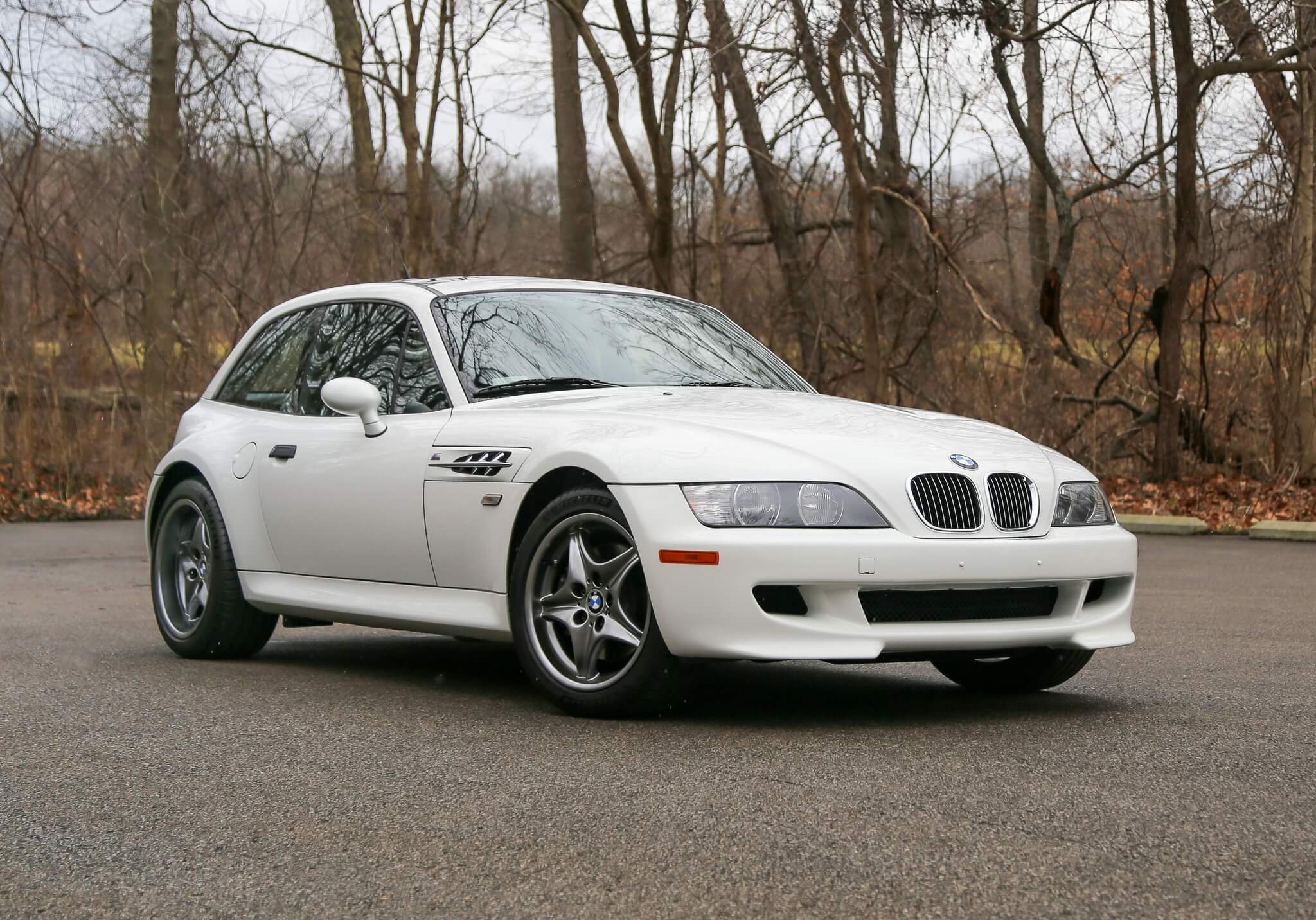 Available for auction is this 2002 BMW E36/8 M Coupe finished in Alpine White over two-tone black and Grey Nappa leather. Produced from 1998 through 2002. the E36/8 M Coupe or “clown shoe” as it’s known amongst enthusiasts remains among BMW’s lowest volume production models ever, in particular those equipped with the venerable S54 engine found in the E46 M3. A total of 678 U.S. specification S54-equipped M Coupes are believed to have been produced. This 2002 example was originally delivered by Brian Harris BMW of Baton Rouge, Louisiana, and remained with its original owner in Ohio for nearly 17 years before it was sold to its second owner in Arizona in 2019. It was sold again in 2021 to its third owner out of Oregon before finally being acquired by Enthusiast Auto Group. Under the care of the seller, the car is said to have been inspected and serviced with a VANOS inspection, valve adjustment, brake fluid and cooling system flush, DME software update, and more. It is now being offered for auction by one the foremost retailers of classic BMWs in the U.S. while showing just under 8k miles on the odometer. 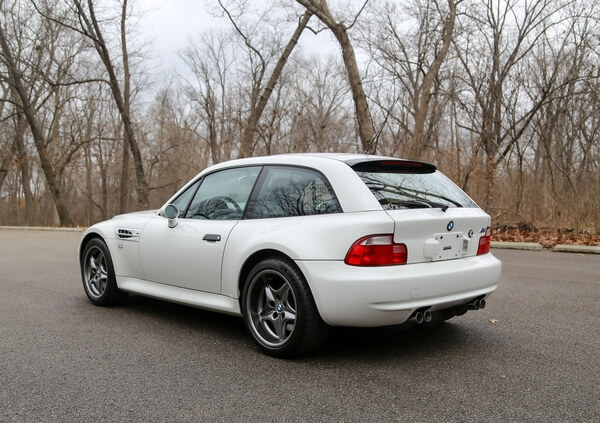 The M Coupe was designed with the goal of increasing the torsional and structural rigidity to the Z3 roadster's chassis, and as such, all body panels from the A-pillars forward are shared between the two models. This example is finished in Alpine White III (Alpinweiss III, 300), with paint protection film covering the full front end, side mirrors, rear quarter panels, lower rockers, and windshield. Details include front fender vents, an M-specific front fascia, a rear window wiper, quad exhaust outlets, and a set of staggered-width 17″ Style 40 wheels. The wheels come dressed in a set of Michelin Pilot Sport 4S tires from 2018. 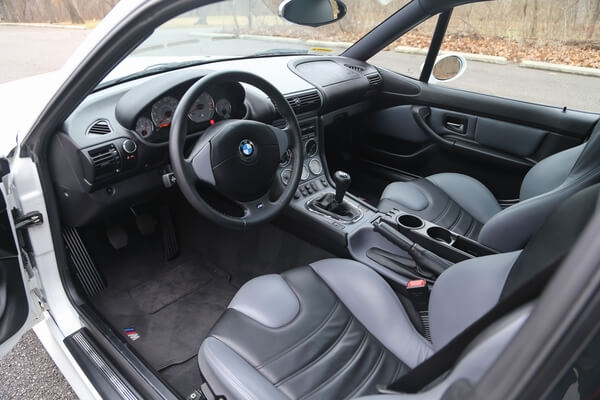 The cabin features a pair of manually-adjustable heated sport seats upholstered in Grey Nappa leather (Q6TT) with black inserts. The door panels are upholstered in a matching Grey and black color scheme and the floors are lined with black carpeting. Amenities include a leather-wrapped M-sport steering wheel, shifter boot, and handbrake handle and boot, a Harmon Kardon sound system with an in-dash CD43 Business Class CD Player, an auto-dimming rearview mirror, cruise control, and a power sunroof. The seller notes that the cabin remains exceptionally well preserved and confirms that all gauges, electronics, and accessories remain functional. 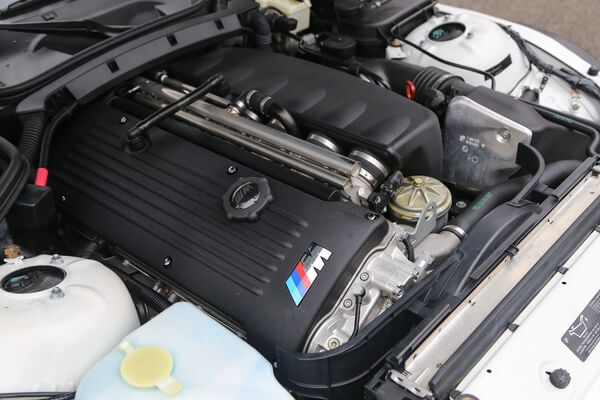 Power comes from a naturally aspirated S54 3.2L inline six-cylinder engine, which produced up to 315 HP and 251 lb-ft of torque when new. The rear wheels are driven by way of a ZF 5-speed manual transmission and a limited-slip differential. The suspension of the M Coupe consists of a MacPherson strut front setup and the semi-trailing arm rear setup found in the E30 3-series. Stopping power is provided by E36 M3 sourced four-wheel vented discs. The CARFAX includes 20 service history entries dating back as far as 2002, and the seller notes that annual oil and filter services have been carried out by BMW dealers. In 2019, the engine coolant, transmission, differential, and brake fluids were flushed, and a VANOS inspection was carried out along with a valve adjustment, DME software update, and replacement vehicle battery and DSC brake pressure sensors. The seller adds that this example was not included in the S54 rod bearing service action, and that the rear sub-frame, differential mount, and rear body structure have been fully inspected with no concerns found. 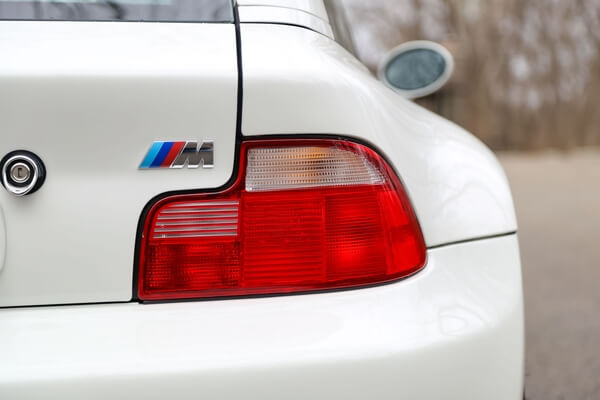 This sale will include the owner’s literature, the original window sticker, and a clean title.