Now available for auction is this 2007 Honda S2000 AP2 finished in Berlina Black over a black leather interior. The second generation of Honda’s advanced S2000 sports car received major updates including new front and rear bumpers, carbon-fiber gearbox synchronizers, re-tuned suspension, and a larger 2.2-liter engine. Staying true to its factory specifications, this AP2 has been well-preserved and is now being offered for auction by its seller out of North Carolina with just over 10k miles on the odometer.

This example was ordered in Berlina Black with a black convertible soft top and glass rear window. Changes for the AP2 generation include revised front and rear bumpers, new LED taillights, redesigned headlight assemblies, and oval-shaped exhaust tips. The 17” ten-spoke wheels were mounted with new Michelin Pilot Sport 4S tires at approximately 9k miles. The seller adds the exterior has been treated with an application of ceramic coating, detailed images are provided in the photo gallery along with a clean CARFAX report.

The cabin is appointed with black leather seats and color-coordinated door panels and carpeting. Standard features include pushbutton ignition, a 4-speaker sound system with an AM/FM/CD concealed stereo, air conditioning, power windows and locks, cruise control, and a front center console. The three-spoke leather-wrapped steering wheel sits ahead of a digital instrument cluster including an 8k-RPM tachometer and gauges for coolant temperature and fuel level. All gauges and accessories are reported to be fully functional including the air conditioning. 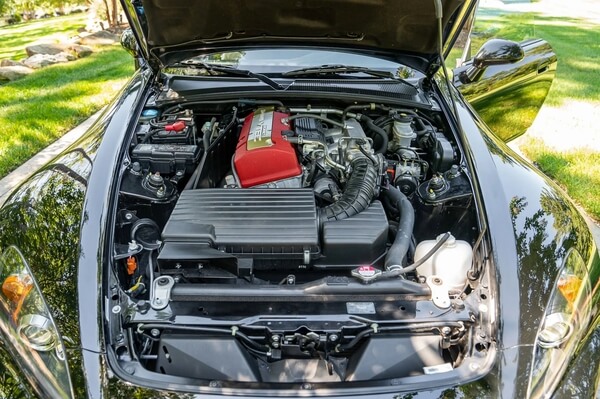 The second generation S2000 is equipped with the F22C1 DOHC inline 4-cylinder engine. An enlarged version of the original S2000’s F20C engine, the 2.2-liter F22C1 carried over V-TEC variable valve timing technology and offers an output of up to 240 HP and 162 lb.-ft of torque. The AP2 also received an updated 6-speed manual gearbox with modified gear ratios and upgraded carbon fiber synchronizer rings. Other features include a limited-slip differential, variable-assist rack and pinion steering, and four-wheel double-wishbone independent suspension. The seller states that the oil and filter have been changed regularly and that new air and cabin filters were installed within the last 1k miles along with a wheel alignment and charging system check. 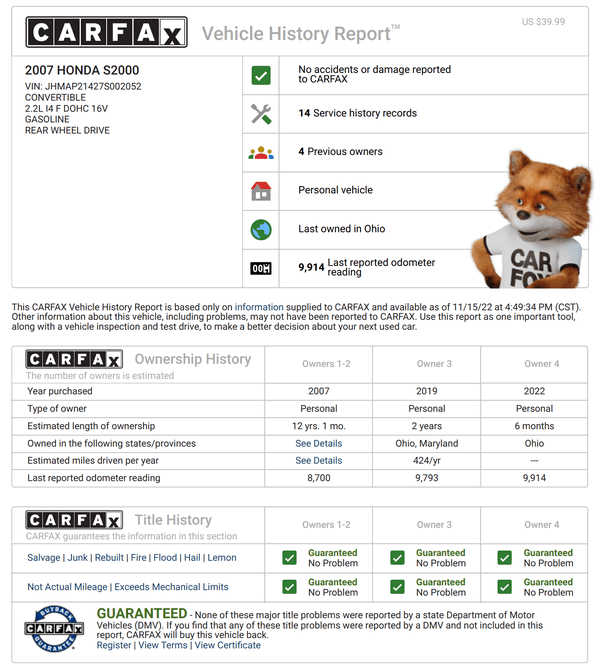 This sale will include owner’s manuals and a clean title.