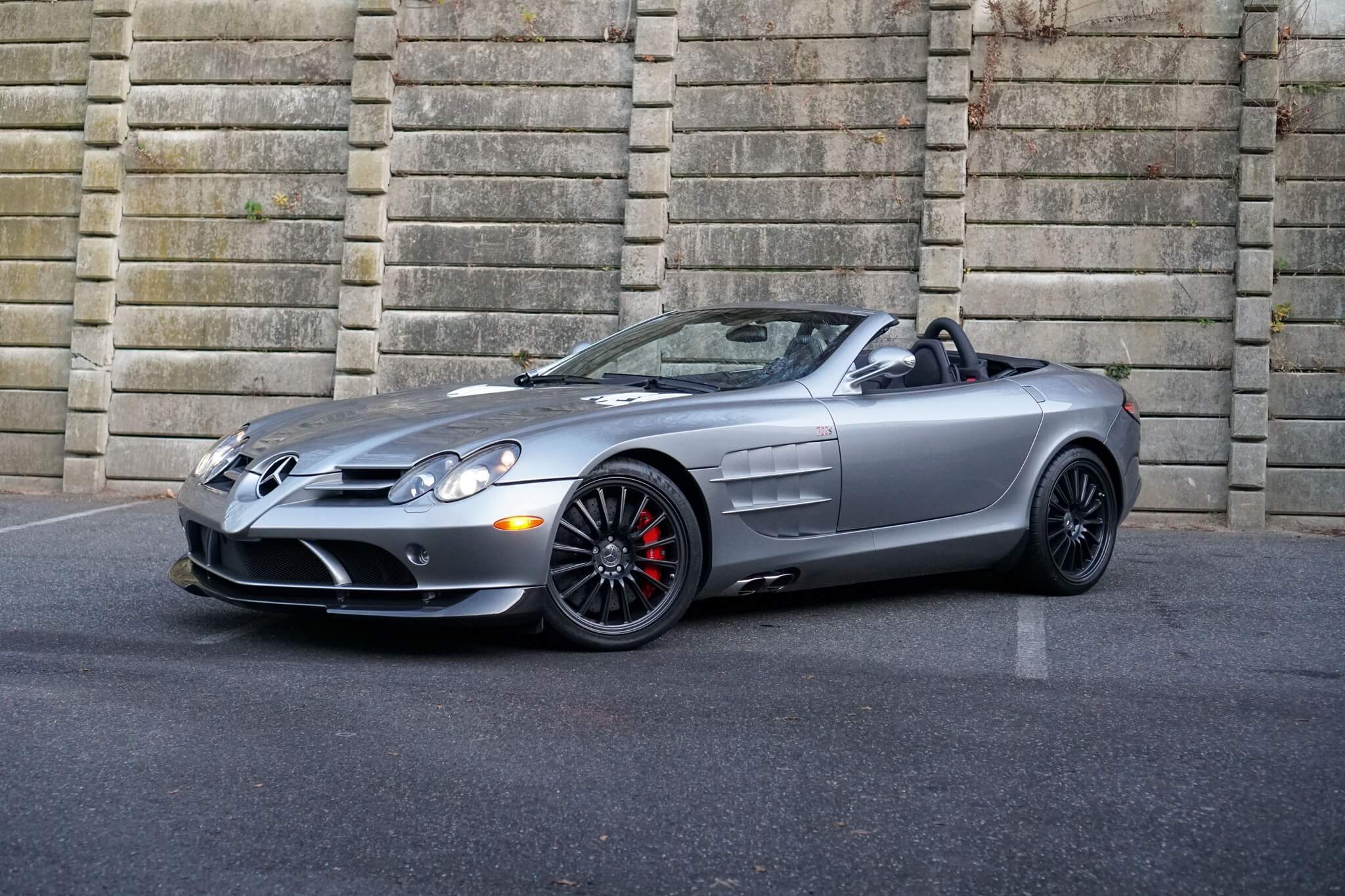 Debuted at the 2007 Frankfurt Motor Show, the SLR 722S Roadster is among the most exclusive versions of the Mercedes-Benz SLR McLaren and one of the fastest open-top sports cars ever produced. All come finished in Crystal Antimony Gray Metallic over black semi-aniline leather and Alcantara with red stitching. The 722 namesake pays tribute to Sir Stirling Moss’s record-setting victory in the 1955 Mille Miglia driving a 300SLR race car, with a starting time of 7:22 AM and a "722" racing number to match. The SLR 722S offers over 640 HP from its 5.5L supercharged V8 along with carbon-ceramic disc brakes, a retuned suspension, lightweight 19" wheels, and more aggressive carbon fiber aerodynamics. Hand-built at the McLaren Technology Centre in England, the 722S Roadster was limited to 150 examples in total, of which only 24 were reportedly delivered in the United States. This two-owner car was sold new at Mercedes-Benz of Olmsted, Ohio, and had spent time in Pennsylvania before joining the current owner's collection in 2021. Showing under 1,500 miles on the odometer, this incredibly rare SLR 722S Roadster is now being offered for auction out of New York. 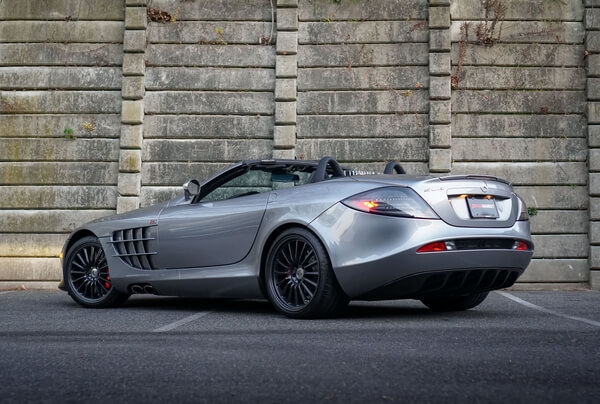 The exclusive Crystal Antimony Gray Metallic (701U) paint was designed specifically for this model and is contrasted by dark tinted lenses, exposed carbon fiber, and red 722S badges. The body is constructed from carbon-fiber-reinforced plastic (CFRP) over a sophisticated carbon-fiber monocoque designed to provide extreme torsional rigidity. Benefiting from the motorsport experience of Mercedes-Benz and McLaren, the aerodynamics of this high-speed roadster were extensively wind tunnel tested, including a smooth carbon-fiber underbody, a large carbon-fiber front splitter, a revised carbon-fiber rear diffuser, and an integrated air brake with an adjusted extension angle in the trunk lid. Model-exclusive forged alloy lightweight 19” wheels come dressed in Michelin Pilot Sport tires. The full front end including the fenders and mirror covers have been preserved under clear paint protection film, and a small imperfection is noted on the passenger-side of the lower front spoiler, detailed images are provided in the gallery along with a clean CARFAX report. 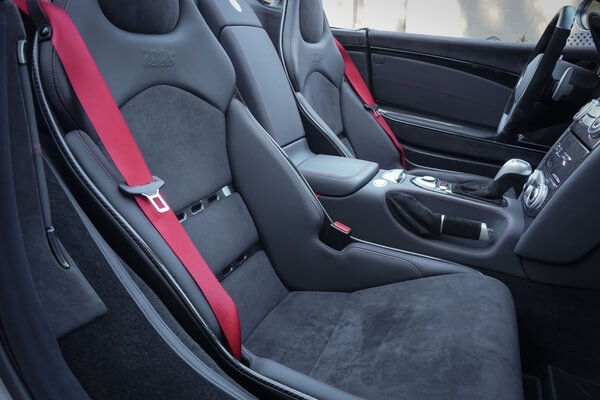 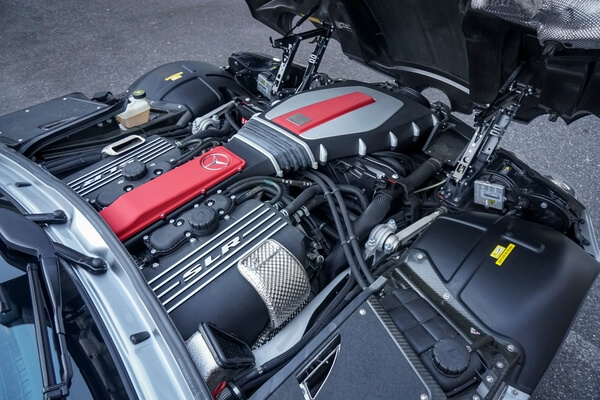 The SLR 722S Roadster is powered by a hand-built 5.5L supercharged V8 with a Lysholm-type twin-screw supercharger, dual intercoolers, and a dry-sump lubrication system. It produces up to 641 HP and 605 lb.-ft of torque, allowing acceleration from 0-60 MPH in as little as 3.7 seconds and a reported top speed of 207 MPH. Power is delivered to the rear wheels through a 5-speed AMG Speedshift R transmission, which offers three different modes of manual operation. The upgraded suspension of the 722S features stiffer springs and shock absorbers along with a 10mm lowered ride height compared to a regular SLR, while braking is handled by carbon-ceramic rotors. The CARFAX report shows a history of regular maintenance carried out by authorized Mercedes-Benz dealerships in Ohio, Pennsylvania, and New York, including a recent service in September of 2021 at Manhattan Motorcars where a new battery was installed. 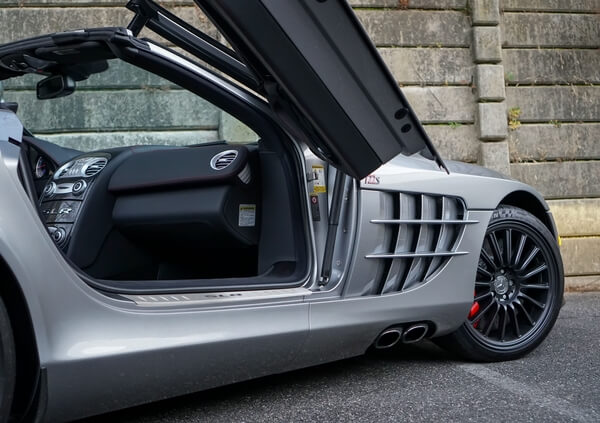 This is a seldom-seen opportunity to own one of only 150 SLR 722S Roadsters ever produced, do not miss out.

*We encourage any interested parties to use this time for arranging pre-sale inspections or viewings.