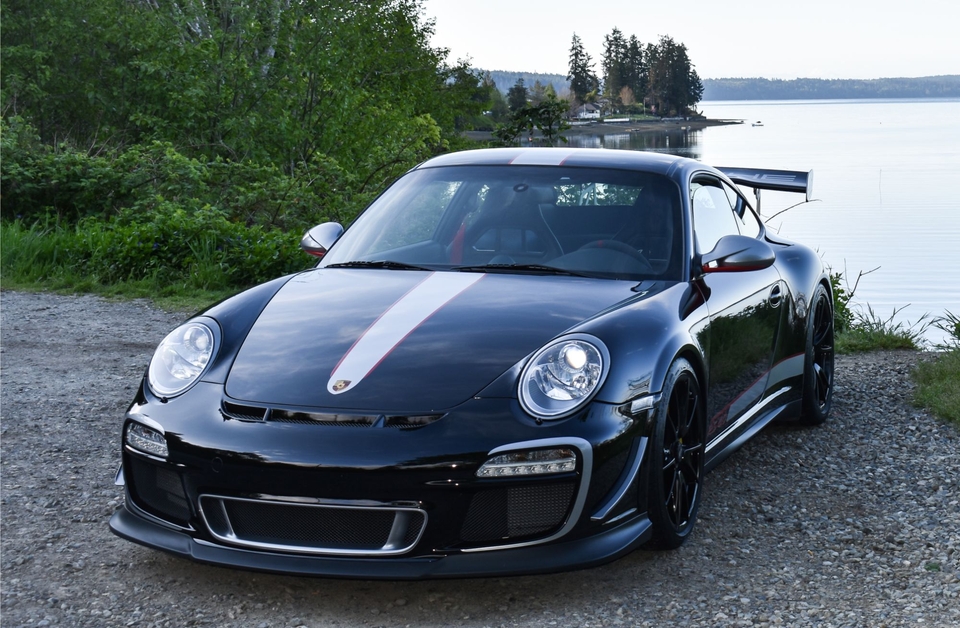 We are pleased to offer for auction this iconic 2011 Porsche 997 GT3 RS 4.0.  Marking one of only 600 units built for the entire world, this example represents one of the most sought-after modern 911’s in existence.  The GT3 RS 4.0 is also coveted for being the last model to retain both a desirable manual transmission and a legendary Mezger flat-six engine.  Highlighting full paint protection film as well as exclusive factory options including a front-axle lift system, extended carbon package and PCCB ceramic composite brakes, this 8k-mile example is a Porsche collector’s dream. 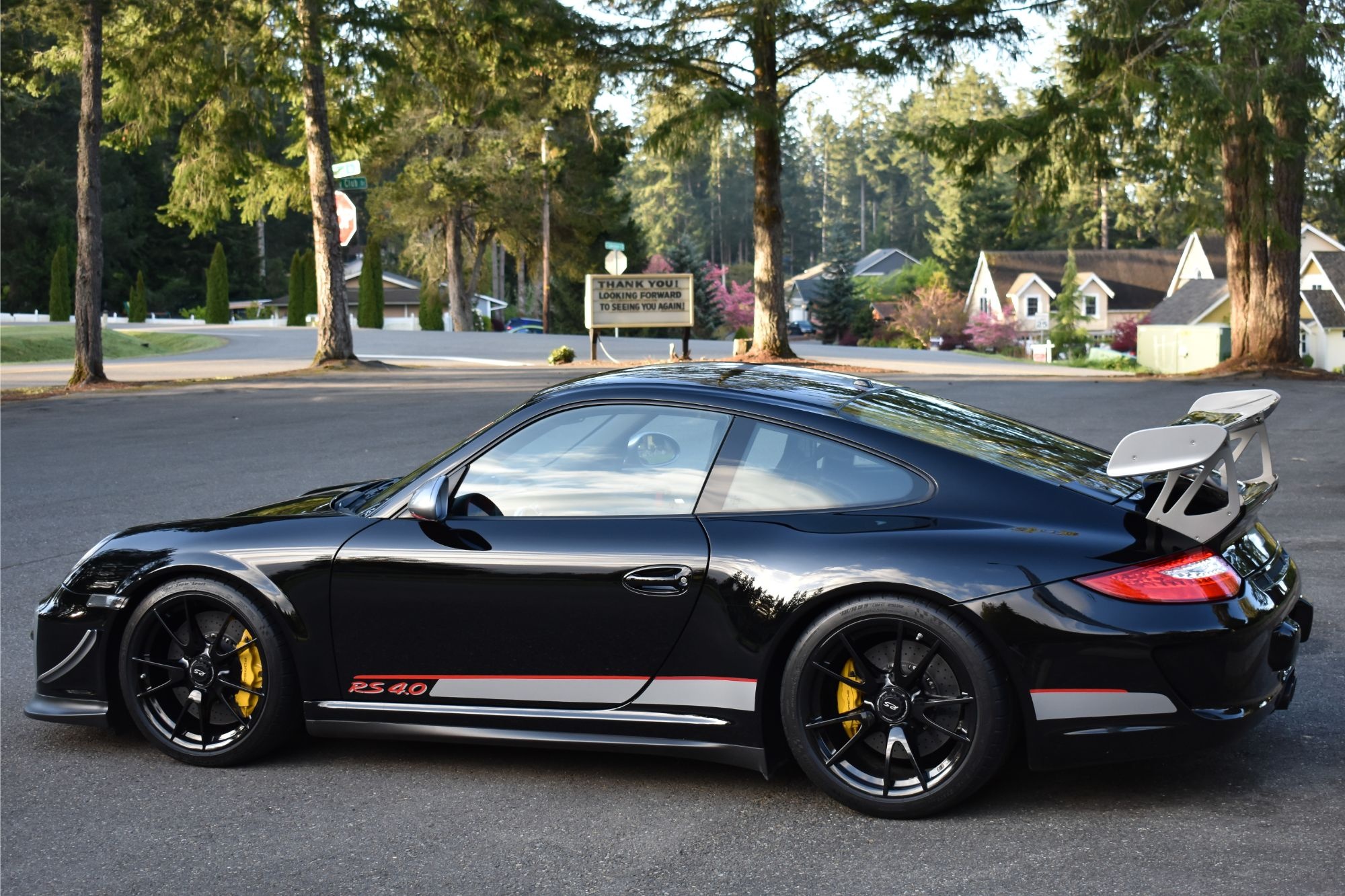 The RS’s black finish is stated to be in excellent original condition.  The seller notes that a paint correction process was carried out before the car received full exterior paint protection film at the time of his purchase.   A collection of detailed images are provided in the photo gallery.  Unique exterior features include a large fixed rear wing, front canards and factory “RS 4.0” graphics which add further distinction to this limited-edition model.  Eye-catching PCCB yellow calipers compliment the black-painted center lock RS wheels which are currently wrapped in new Michelin Pilot Super Sport tires. 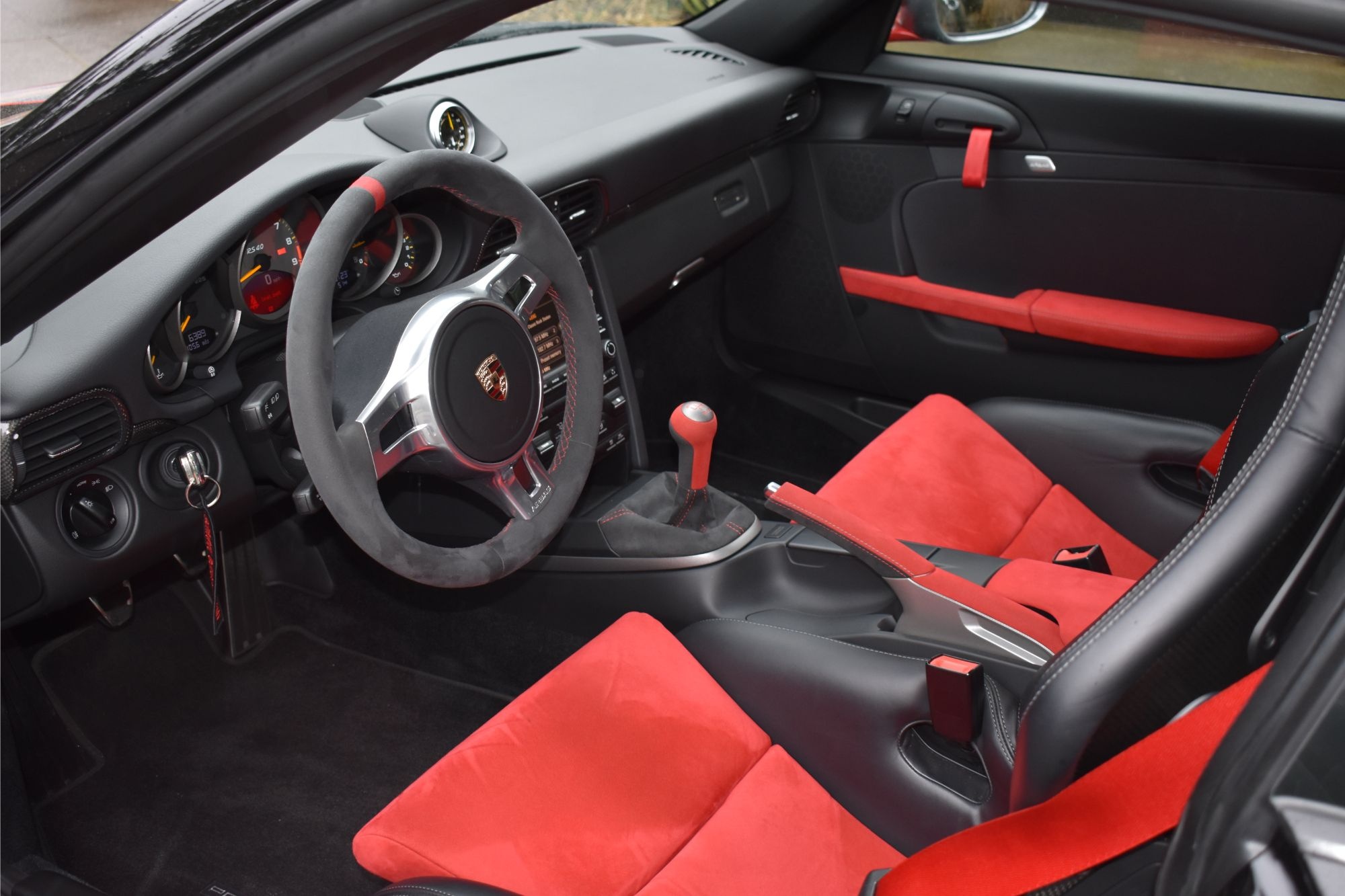 The cabin of this GT3 RS 4.0 is upholstered in black leather with red alcantara details.  The interior is noted to be in like-new condition with all original accessories fully functional.  Some notable features include red RS cloth door pulls, sport bucket seats with carbon fiber backrests and a numbered limitation plaque designating this as the 389th example built out of a series of 600 units.  This GT3 also features a desirable front axle lifting system that enables the nose of the car to be raised and lowered when traversing obstacles.  Accompanied by an original window sticker of over $209k, this 997 showcases the following additional options: 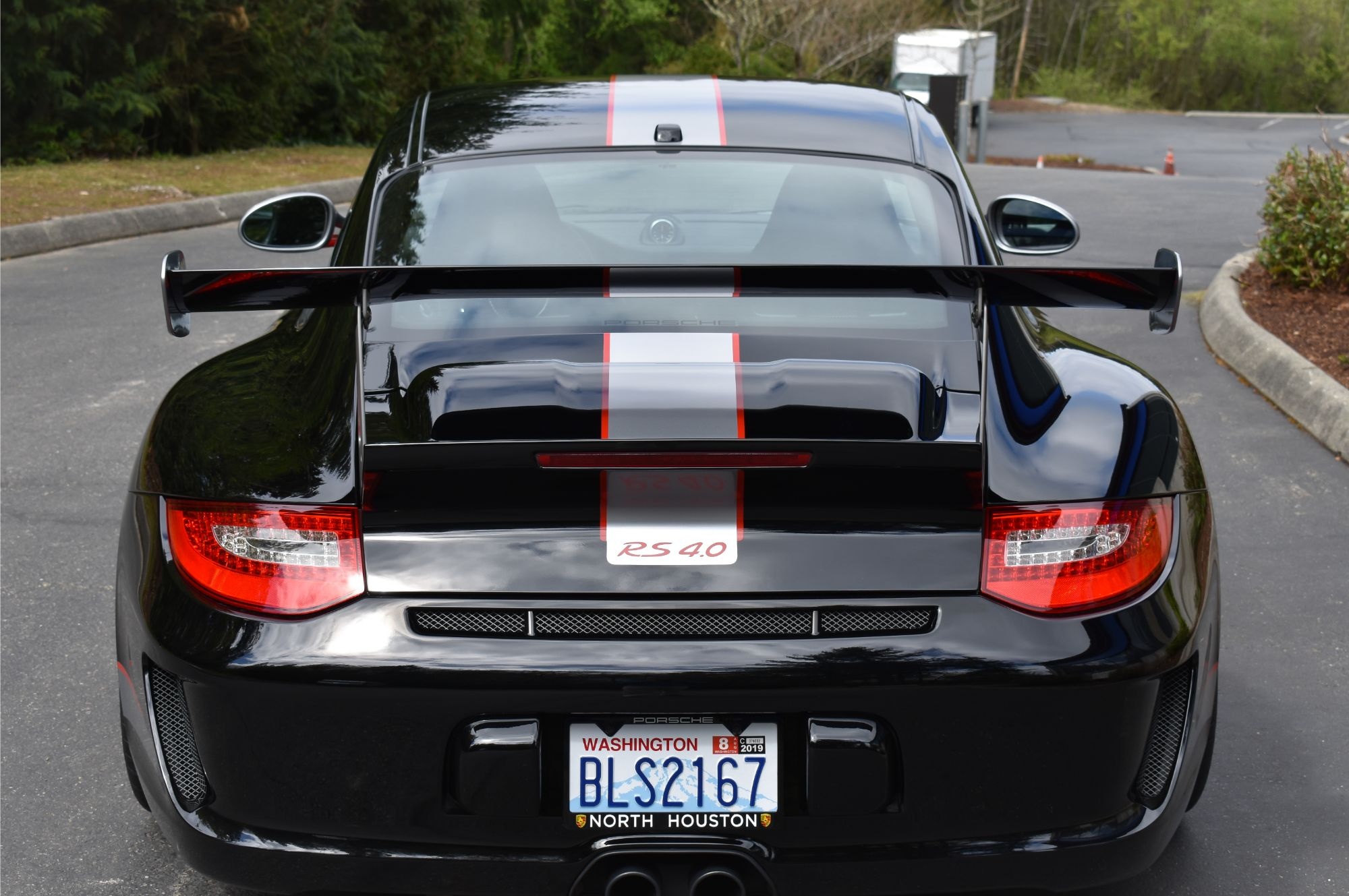 This GT3 RS is equipped with a highly sought-after 4.0L Mezger flat-six engine rated at nearly 500 HP.  Power is sent directly to the rear wheels by way of a 6-speed manual transmission making for a visceral and unadulterated driving experience.  Boasting the largest engine to have ever been offered in a road-going 911 at the time, the 4.0 is capable of accelerating from 0-60 in as little as 3.5 seconds while reaching top speeds north of 190 MPH.  This coveted engine utilizes the crankshaft from the GT3 RSR racecar resulting in increased stroke dimensions.  A carbon fiber hood and front fenders have been implemented in conjunction with other lightweight components resulting in an impressive power-to-weight ratio of 365 BHP per ton.  PCCB ceramic composite brakes provide consistent stopping power while Sport Chrono enables the driver to clock lap times and adjust performance characteristics while underway. 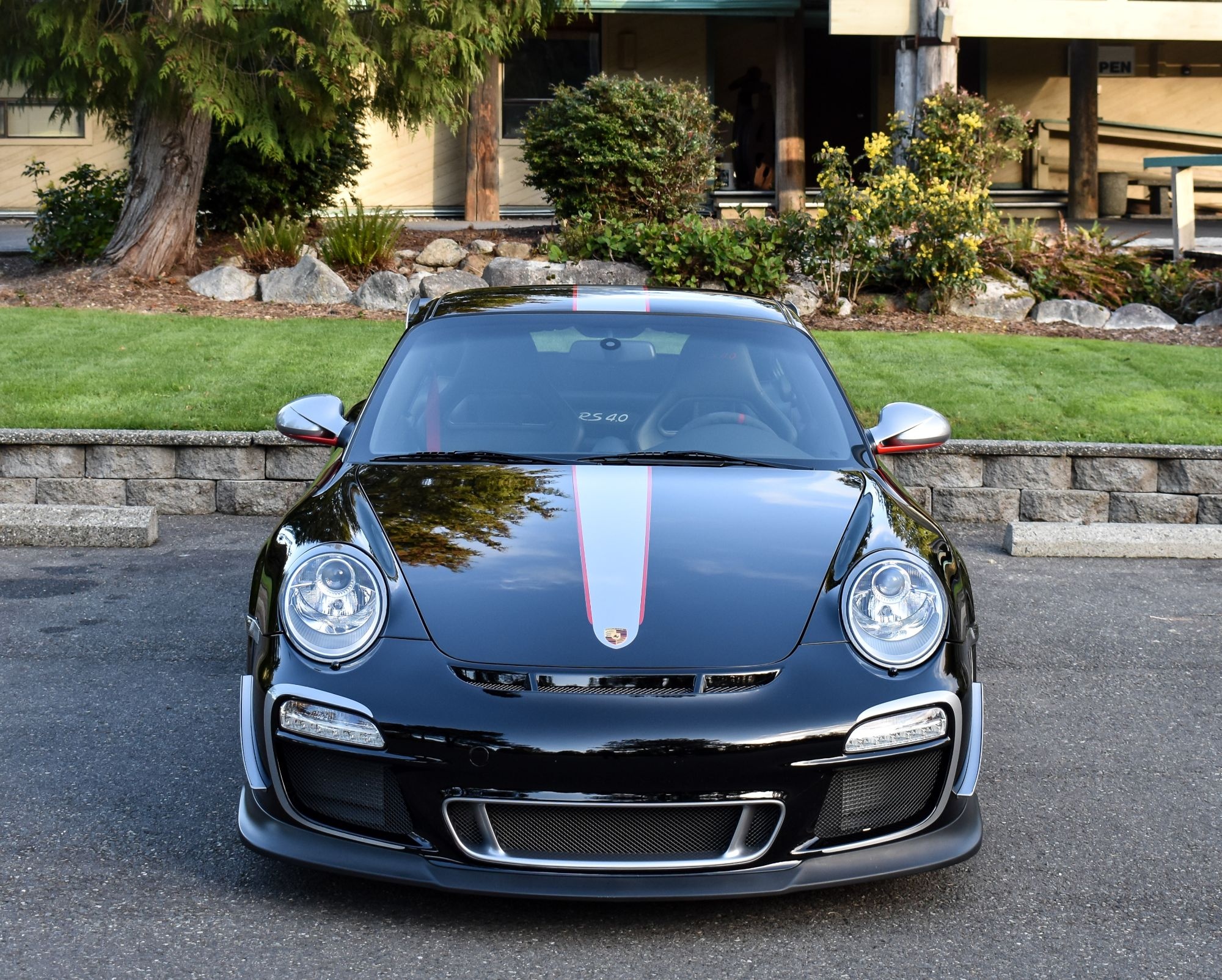 Reported to be up-to-date on all scheduled maintenance, this 4.0 was last serviced in 2019 and is said to have been driven sparingly since.  The seller confirms this GT3 to be in excellent driving condition, just waiting to be cherished by its next owner. 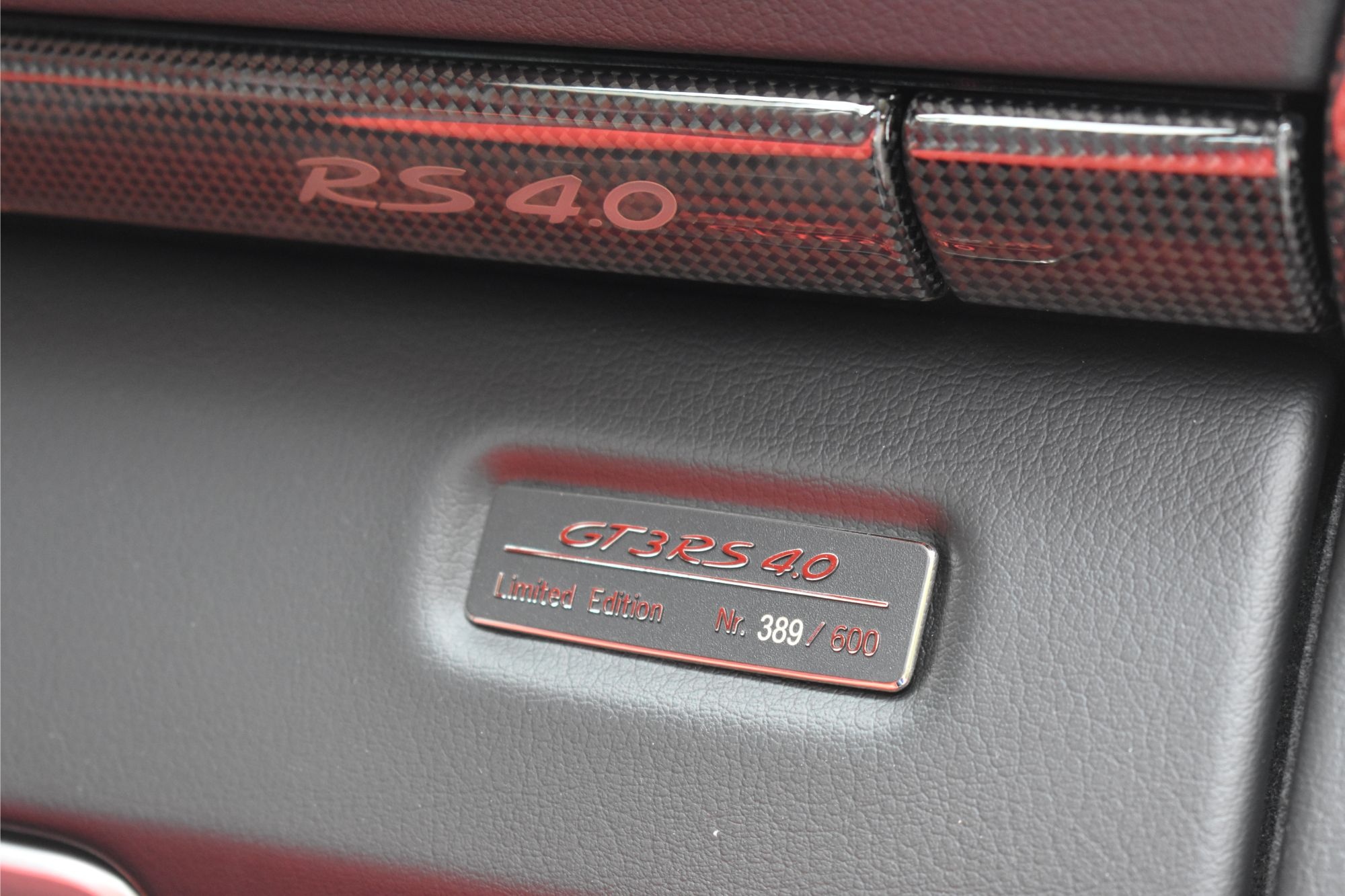 Considered by most Porsche enthusiasts to be the greatest 997 of all time, the RS 4.0 remains among the most desirable and collectible 911’s on the planet.  With its unrelenting naturally aspirated power and mandated 6-speed manual gearbox, the RS 4.0 has been hailed by Car and Driver as “the purest 911”.

The sale of this RS 4.0 will include two sets of keys, original books and  documentation, a clear title and a Porsche Certificate of Authenticity.  Do not miss this incredibly rare opportunity to own one of the most highly-regarded Porsche 911’s of all time.