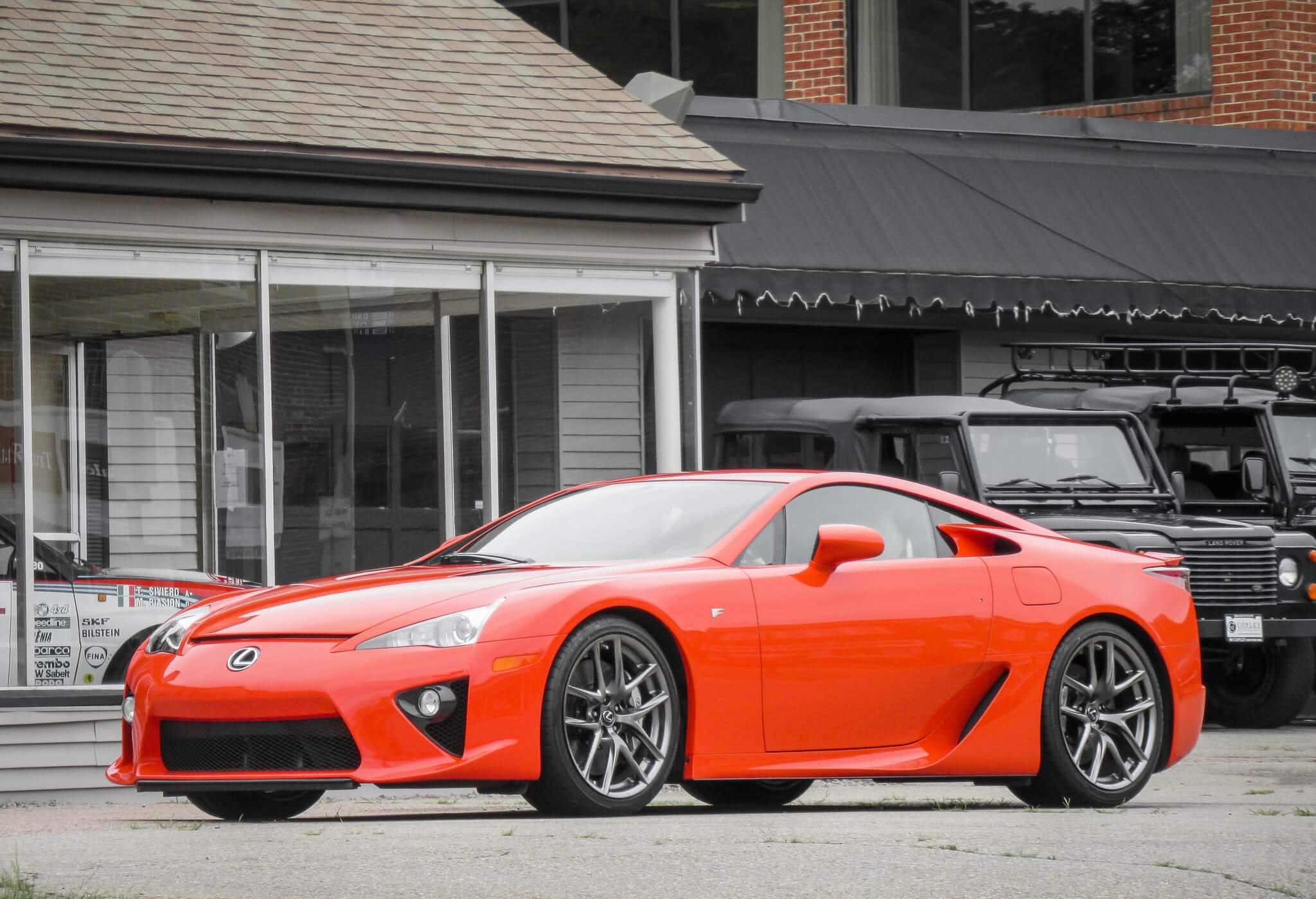 We are pleased to offer this 2012 Lexus LFA presented in the one-of-a-kind combination of Sunset Orange over a Cream/Black leather interior.  Created at the behest of Akio Toyoda, CEO of Lexus’s parent company the Toyota Motor Corporation, the LFA was developed to show off the performance capabilities of Lexus and create a global icon for the brand.  It was tested extensively at the Nürburgring and utilizes a lightweight carbon fiber-reinforced polymer (CFRP) monocoque chassis along with a naturally aspirated V10 engine paired with a 6-speed single-clutch automated manual transmission.  It was one of the most expensive road-going Japanese sports cars ever developed, and production ceased in December of 2012 with 500 cars built.  This particular example, #272, was reportedly delivered new to Toyota chairman Akio Toyoda and was subsequently used as a promotional launch vehicle before entering long-term ownership of Toyota Costa Rica distributor Javier Quiros.  It has had only one other owner since and kept as part of a prominent supercar collection and was even featured in the July 2019 issue of Motor Trend.  Now showing just over 8,600 miles on the odometer, this remarkable Lexus LFA is being offered for auction by its seller out of Massachusetts. 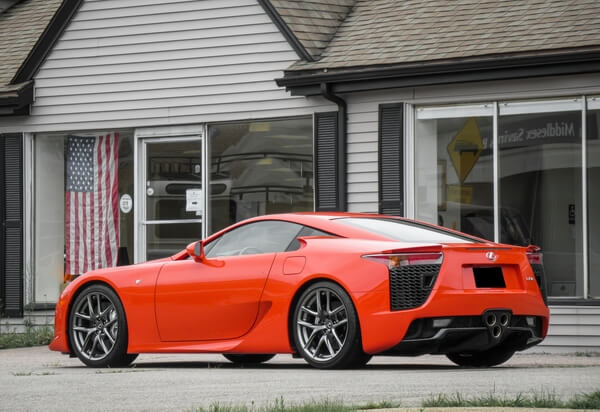 This LFA is said to be one of only three examples finished in Sunset Orange.  The carbon fiber-reinforced polymer (CFRP) bodywork was styled under the direction of Lexus Design general manager Kengo Matsumoto.  The design focuses on maximizing downforce and aerodynamic efficiency with its sharp edges, strategic air scoops, and speed-sensitive rear wing that automatically deploys at speeds above 50 MPH.  Additional images are provided in the photo gallery along with a clean CARFAX report.  Carbon ceramic brake discs can be seen through the spokes of the 20” BBS forged wheels dressed in Bridgestone Potenza tires. 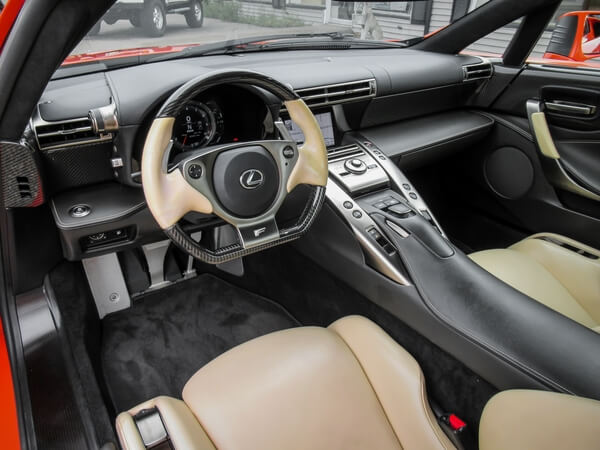 Inside, this LFA showcases a two-tone Cream and Black leather interior with carbon fiber, Alcantara, and metallic accents.  The flat-bottom F-Sport steering wheel features a pushbutton ignition and alloy paddle-shifters and sits ahead of a digital thin-film transistor (TFT) speedometer with a dynamic display that changes corresponding to different driving conditions.  Other features include a premium 12-speaker Mark Levinson sound system, aluminum pedals, and a unique ducting system developed by Yamaha that selectively routes two octaves of the V10’s engine note into the cabin for an immersive driving experience.  Some minor signs of wear are noted on the driver’s seat bolster and steering wheel, and the seller confirms all gauges and accessories to be working properly. 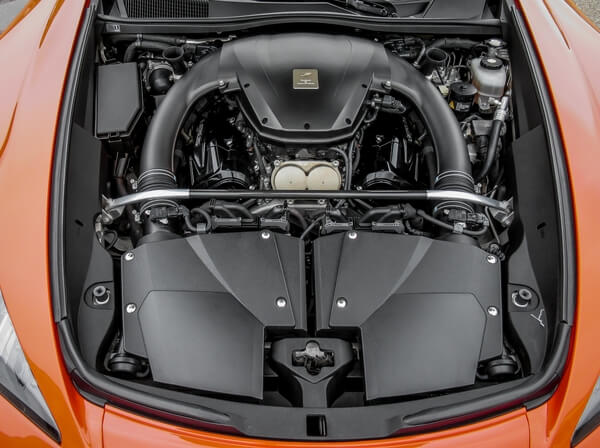 The naturally aspirated 4.8L V10 engine features dual VVT-i variable valve timing and is claimed to reach its 9k-RPM redline from idle in as little as six-tenths of a second.  It utilizes dry-dump lubrication, dual rear radiators, a dual-stage variable intake manifold, individual throttle bodies, and a titanium exhaust system with signature inverted-V three-port tailpipes.  The famed exhaust note was painstakingly tuned and inspired by high-revving Formula One cars. A 6-speed single-clutch automated manual gearbox sends as much as 552 HP to the rear wheels through a carbon-fiber torque tube, allowing acceleration from 0-60 MPH in approximately 3.5 seconds with a top speed over 200 MPH.  The suspension consists of a double-wishbone setup in front and a multi-link design in the rear with coilovers at all four corners.  Stopping power is provided by 6-piston front and 4-piston rear Brembo monobloc brake calipers paired with carbon-ceramic rotors and Toyota’s electronic brake-by-wire system.  Three selectable drive modes are also offered through the Vehicle Dynamics Integrated Management (VDIM) stability control system.  There are no outstanding maintenance items reported and the seller notes that a major service was completed at 8,050 miles. 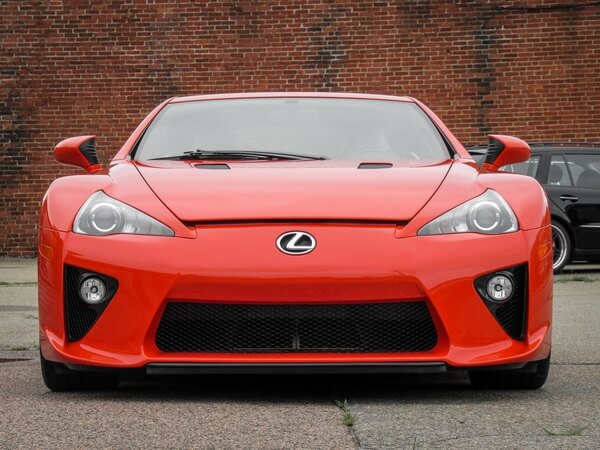 This sale will include a clean title.  One of the most significant and advanced supercars of the modern era, the LFA signified a major milestone for Lexus and the Japanese sports car market.  With its impressive provenance and one-off color combination, this 2012 example makes a fine addition to any world-class car collection.