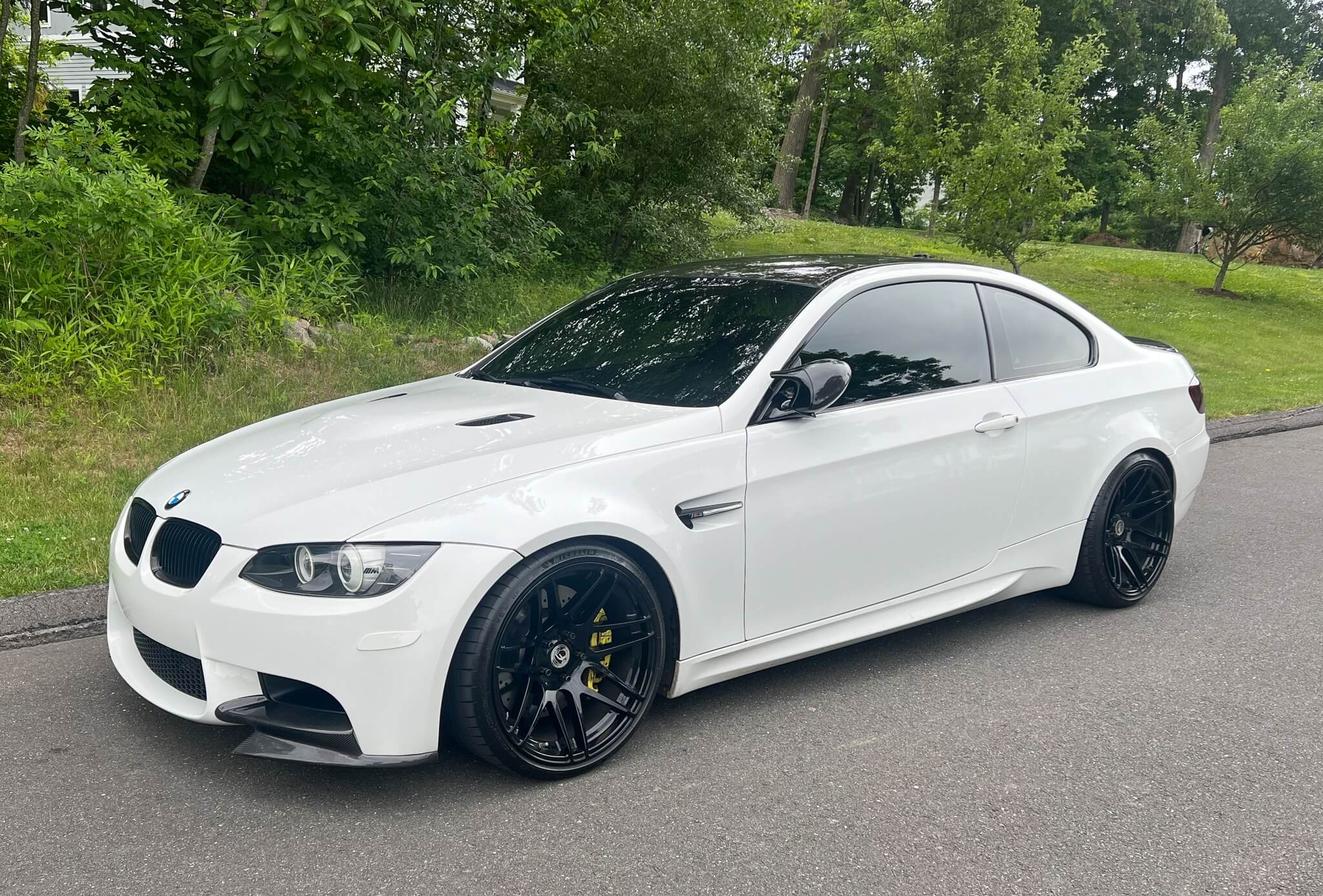 Representing the fourth generation of BMW’s high-performance M3 model, the E90/92/93 series were the first and only M3s to have been equipped with a V8 engine. This final-year 2013 Coupe is finished in Alpine White over a Black/Palladium Silver Novillo leather interior, optioned with a 7-speed DCT( Dual-Clutch Transmission), Electronic Damper Control (EDC), the Competition Package, heated front seats, navigation, rear sunblinds, rear Park Distance Control sensors, and more. In November of 2016, this vehicle received a rebuilt/salvage title due to flood damage during the previous ownership and was professionally repaired in addition to receiving new coated rod bearings, custom headlights, 20” Forgestar wheels, a Dinan exhaust system, and a performance ECU tune. Now showing approximately 66k miles on the odometer, this M3 is being offered for auction by its seller out of Connecticut. 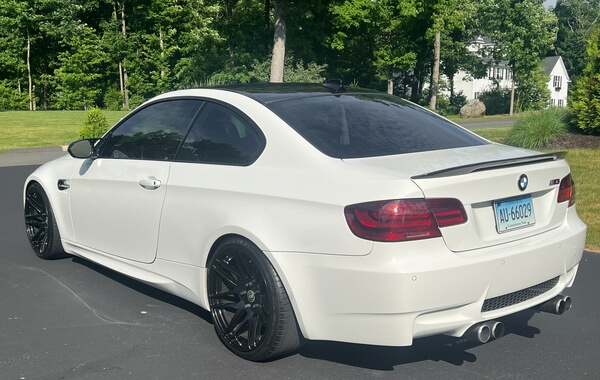 The exterior is finished in Alpine White (300) and features a carbon-fiber roof panel, front fender vents with integrated LED turn signals, revised bumpers and side skirts, an aluminum power dome hood, quad exhaust tips, a rear decklid spoiler, and adaptive Xenon headlights. The exterior has been ceramic coated and the passenger-side front fender is said to have been refinished under prior ownership. Modifications include a carbon fiber rear wing, carbon fiber winglets on the front bumper, carbon fiber mirror caps, black kidney grilles, black M3 badging, window tints, custom headlights with switchback amber and white LEDs, and 20” Forgestar wheels which have been powder coated gloss black and dressed in Michelin Pilot Sport 4S tires from 2018. 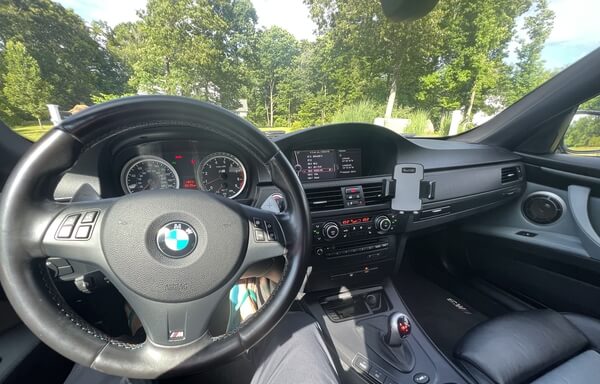 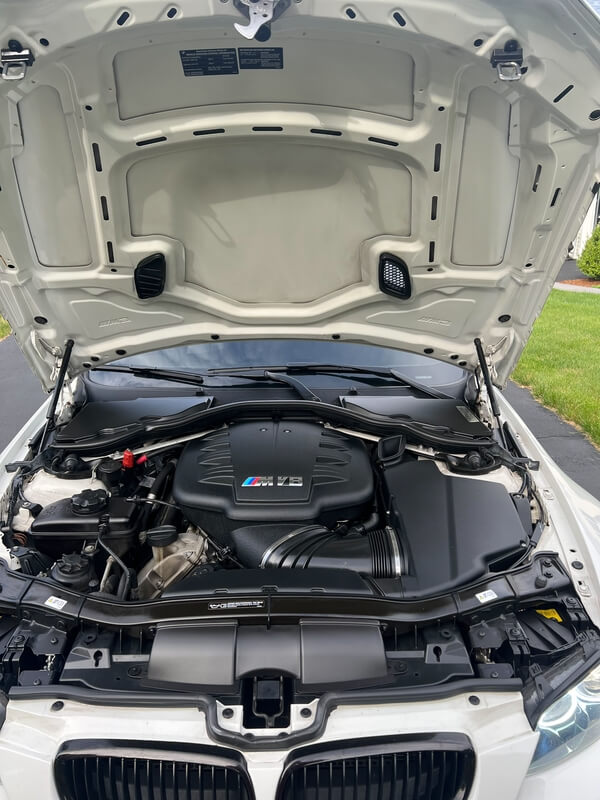 The E92 M3 is equipped with a 4.0L S65 V8 engine rated at 414 HP and 295 lb.-ft of torque.  Power is sent to the rear wheels through a 7-speed dual-clutch transmission and a limited-slip differential. The optional Competition Package adds stiffer springs with a 10mm lower ride height, a remapped Electronic Dampening Control system, and a package-specific sportier Dynamic Stability Control system with a higher slide threshold. Modifications include a Dinan exhaust system and a performance tune. The seller reports the rod bearings were replaced in February of 2018 and the airbags were replaced under a factory recall by a BMW dealership. The brakes were also replaced at 63k miles. 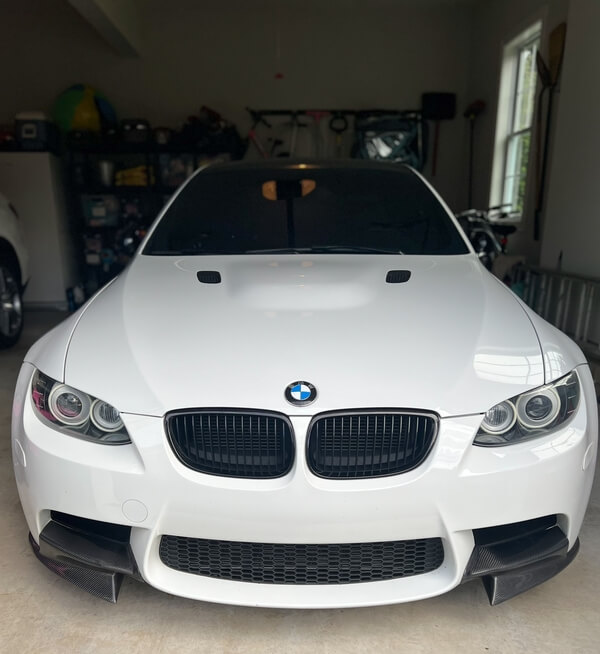 This sale will include a rebuilt/salvage title and some service documentation.