Unquestionably one of the most exclusive and meticulously crafted automobiles ever created, the Pagani Huayra features beautifully sculpted bodywork centered around a handcrafted Mercedes-AMG V12 engine. Incorporating advanced active aerodynamics and exuding induction noise from its twin turbochargers, the Huayra appropriately derives its namesake from the ancient Quechua word for wind. The Roadster version of the Huayra was unveiled at the 2017 Geneva Motor Show featuring a removable hardtop and was limited to only 100 examples in total. This 2018 Huayra Roadster is designated as “69 di 100” and comes finished in Blu Danubio tinted carbon fiber with Bronzo Chiaro accents and a blue leather interior. Showing approximately 4,500 kilometers or just under 3k miles, this stunning Pagani Huayra Roadster is now being offered for auction by its seller out of Canada. 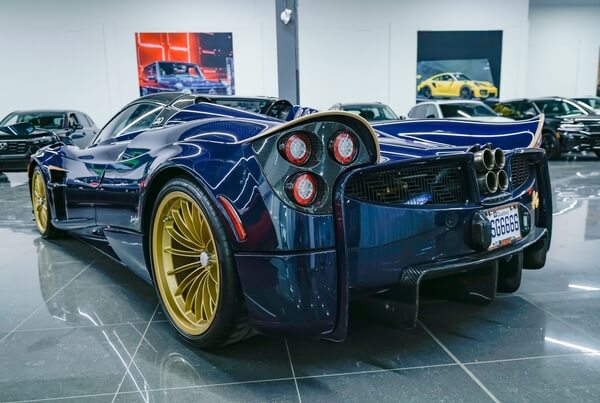 In designing the Huayra Roadster, Horacio Pagani envisioned a slightly more aggressive shape than the Coupe while incorporating more advanced technology from the Huayra BC performance model. The Roadster is differentiated by conventional opening doors, a redesigned engine cover, and a more curvaceous rear end. Completed after 6 years of development, the Huayra Roadster is said to have been the most complicated project undertaken by Pagani. 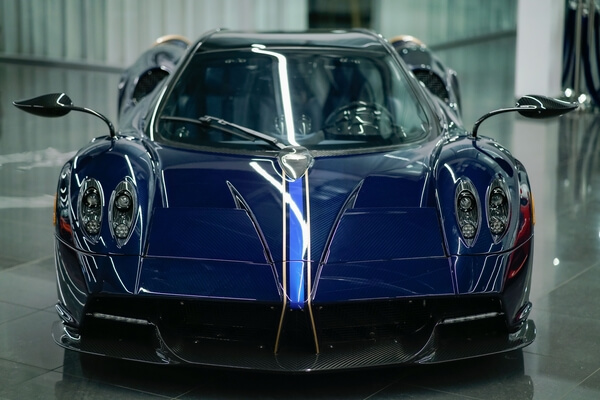 Created from titanium-reinforced carbon fiber, the body of this Huayra is finished in an exposed Blu Danubio tinted weave with a custom center stripe in Bronzo Chiaro and Blu Francia. Other details include contrasting Bronzo Chiaro accents, titanium quad-tipped central exhaust pipes, prominent fender-mounted wing mirrors, blue brake calipers, and center-locking forged aluminum alloy wheels in gold. The exterior has been preserved under a layer of clear paint protection film.

Hand-tailored by world-class craftsmen, the cabin is appointed with a combination of New Jeans (blue) leather and Alcantara with gold-finished instrument dials, exposed carbon fiber weave, and black anodized aluminum trim. Features include a shifter with exposed mechanical linkage, an integrated leather luggage set, a custom suit holder, and a touchscreen infotainment system. 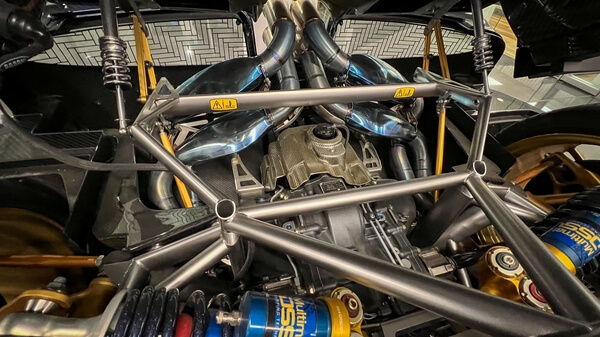 Designed specifically for Pagani, the twin-turbocharged V12 engine is hand built by Michael Kübler of Mercedes-AMG in Germany. An output of 754 HP and 738 lb.-ft of torque are sent to the rear wheels through a 7-speed automated manual transmission by Xtrac paired with an electronically controlled limited-slip differential. Weighing in less than its hardtop counterpart, the Huayra Roadster accelerates from 0-60 MPH in just 3 seconds with a top speed of 238 MPH. Stopping power comes from ventilated carbon ceramic discs clamped by Brembo brakes with 6-piston calipers in front and four-piston calipers in the rear. The seller states there are no outstanding maintenance items at this time.

This sale will include some documentation, factory seat and steering wheel covers, a luggage set, and a clean title.