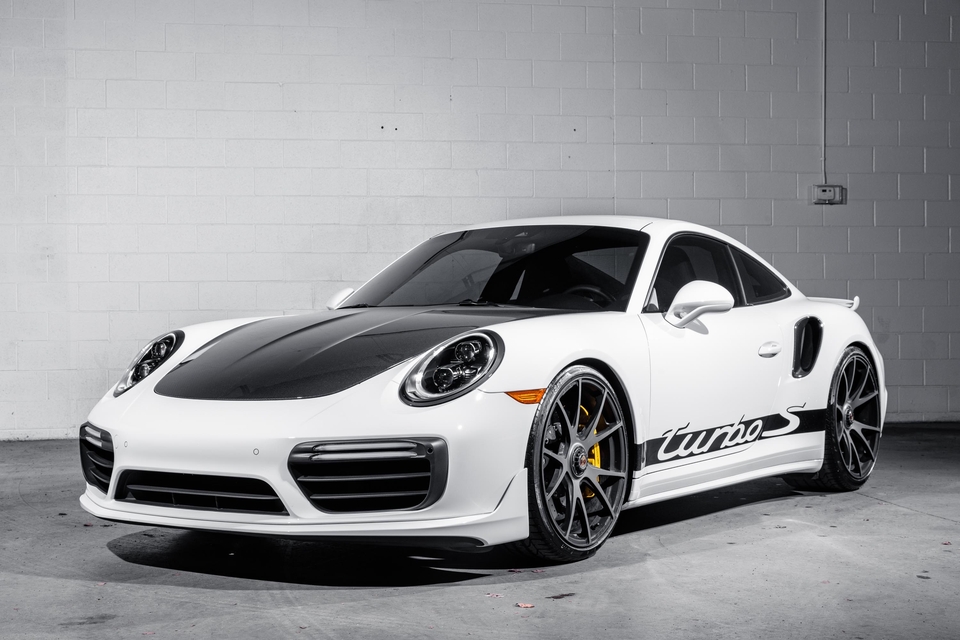 Up for auction is this handsomely equipped 2019 Porsche 991 Turbo S finished in white over a black leather interior.  Commanding an original sticker price of over $213k, this 991 boasts exclusive factory options including the front axle lift system, Burmester High-End Surround Sound System and the highly sought-after Turbo Aerokit.  Showcasing tasteful visual and performance upgrades including a Vorsteiner carbon fiber hood and Tubi exhaust system as well as upgraded GMG wheels and suspension, this Turbo S is truly one of a kind.  Representing Porsche’s flagship supercar, this 1-owner 2019 example is now being offered for auction in like-new condition showing just over 5k miles on the odometer. 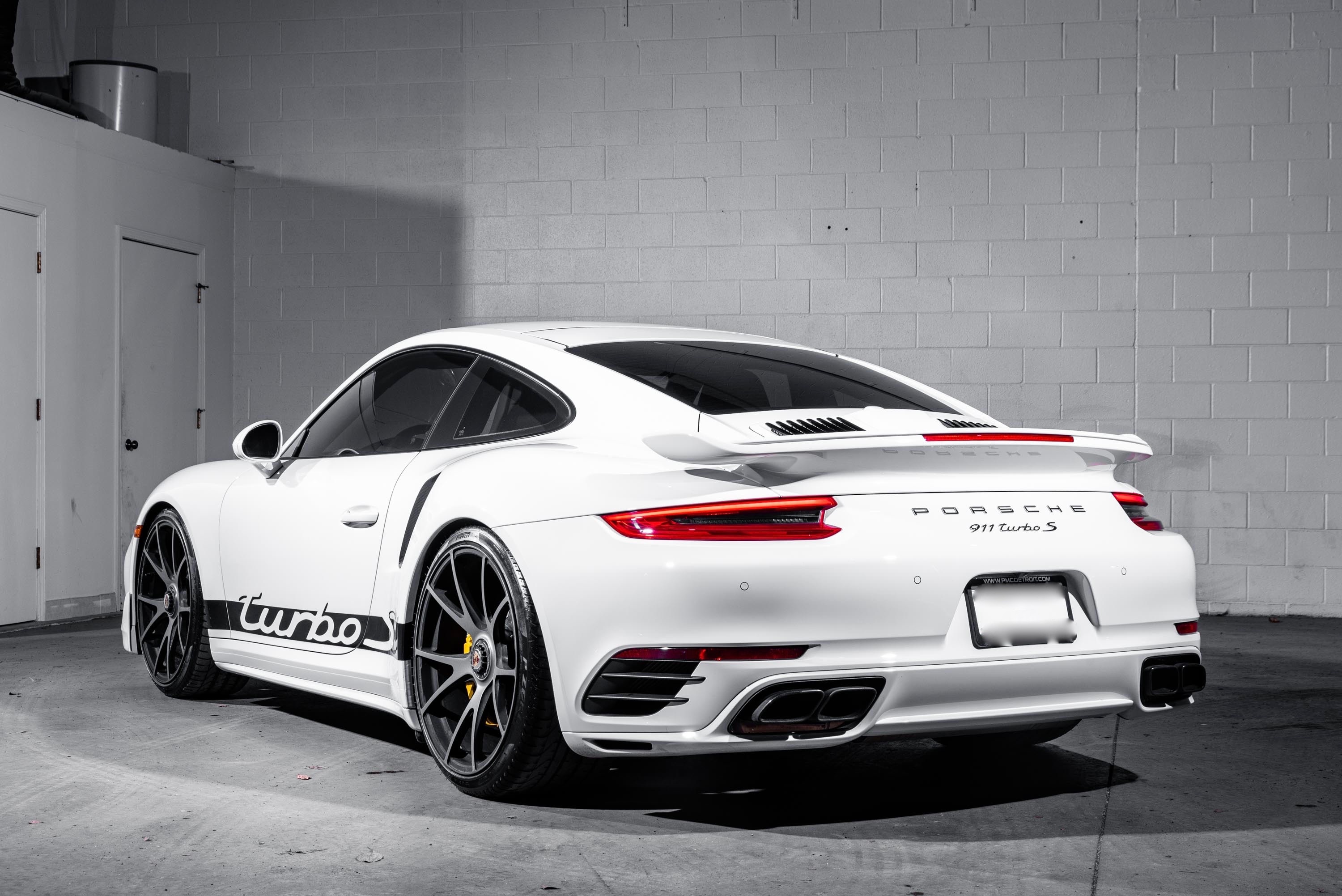 The white finish on this Turbo S is shown to be in absolutely pristine condition with paint protective film applied over the front bumper, hood, fenders and mirrors.  This 991 has been configured with the coveted Turbo Aerokit which is comprised of a distinctive front spoiler and a redesigned decklid that features an enhanced rear spoiler with side winglets.  Custom details have been applied including carbon fiber air intakes, a Vorsteiner carbon fiber front hood and removable “Turbo S” side graphics in black.  This 991 rides on a set of upgraded GMG Racing wheels which come dressed in like new Pirelli P Zero tires.

This turbo’s luxurious black leather interior is stated to remain entirely original and in like-new condition.  Creature comforts include heated and ventilated front seats, voice control, Porsche Entry & Drive, an electric tilt/slide sunroof, heated multifunction steering wheel, the Burmester® High-End Surround Sound System and lane change assist.  Exclusive factory details include illuminated door sill guards in carbon fiber and Porsche crested headrests as well as instrument gauges and Sport Chrono dial in white.  This Turbo S also features a desirable front axle lift system which enables the nose of the car to be raised or lowered when traversing obstacles.  An image of the complete build sheet can be found within the photo gallery. 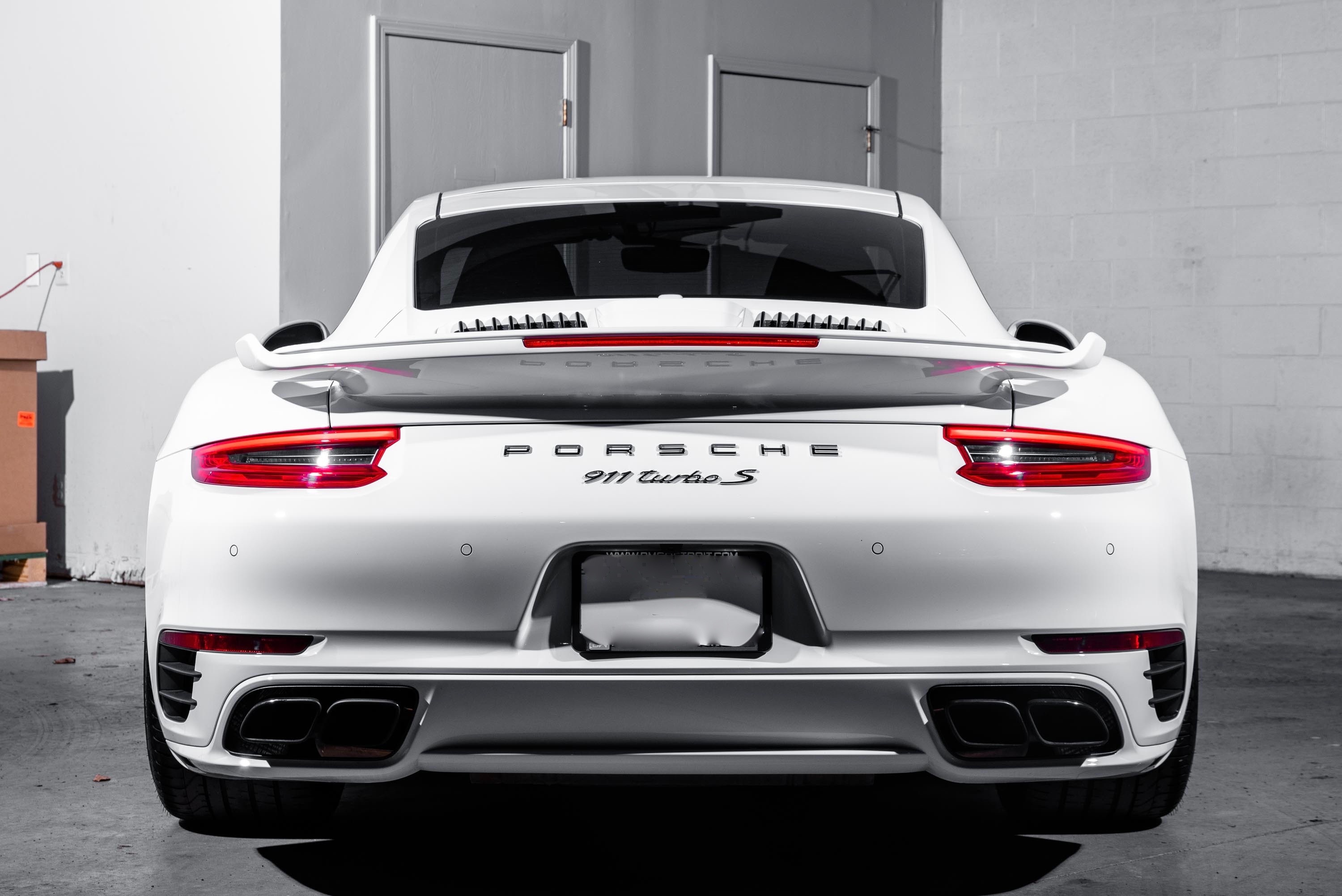 Power comes from a 3.8 L twin turbocharged flat-six engine rated at an impressive 580 HP and 516 lb-ft of torque.  All four wheels are driven by way of a 7-speed dual-clutch PDK transmission making for a blistering 0-60 time of approximately 2.6 seconds.  An aftermarket Tubi performance exhaust system and Champion ECU tune provide for an enhanced engine note and increased horsepower, while upgraded GMG suspension keeps the car firmly planted on the road.  Just over 5k miles from new and backed by a factory warranty, this Turbo S is stated to be up to date on all scheduled maintenance.  Having undergone a recent full service, this car is ready to be enjoyed by its next owner. 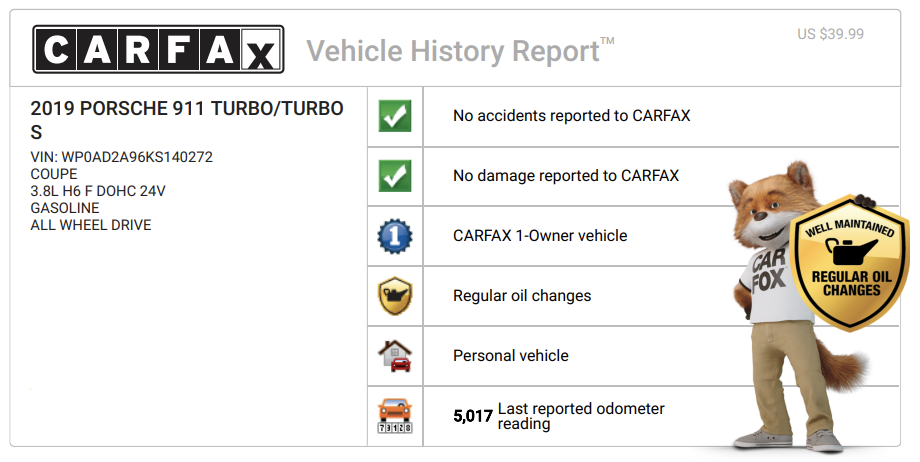 The sale of this remarkable Turbo S will include a set of two keys, original books, and service records.  Highlighting must-have factory options and top-of-the-line upgrades, this Turbo S represents an incredible value across the board.