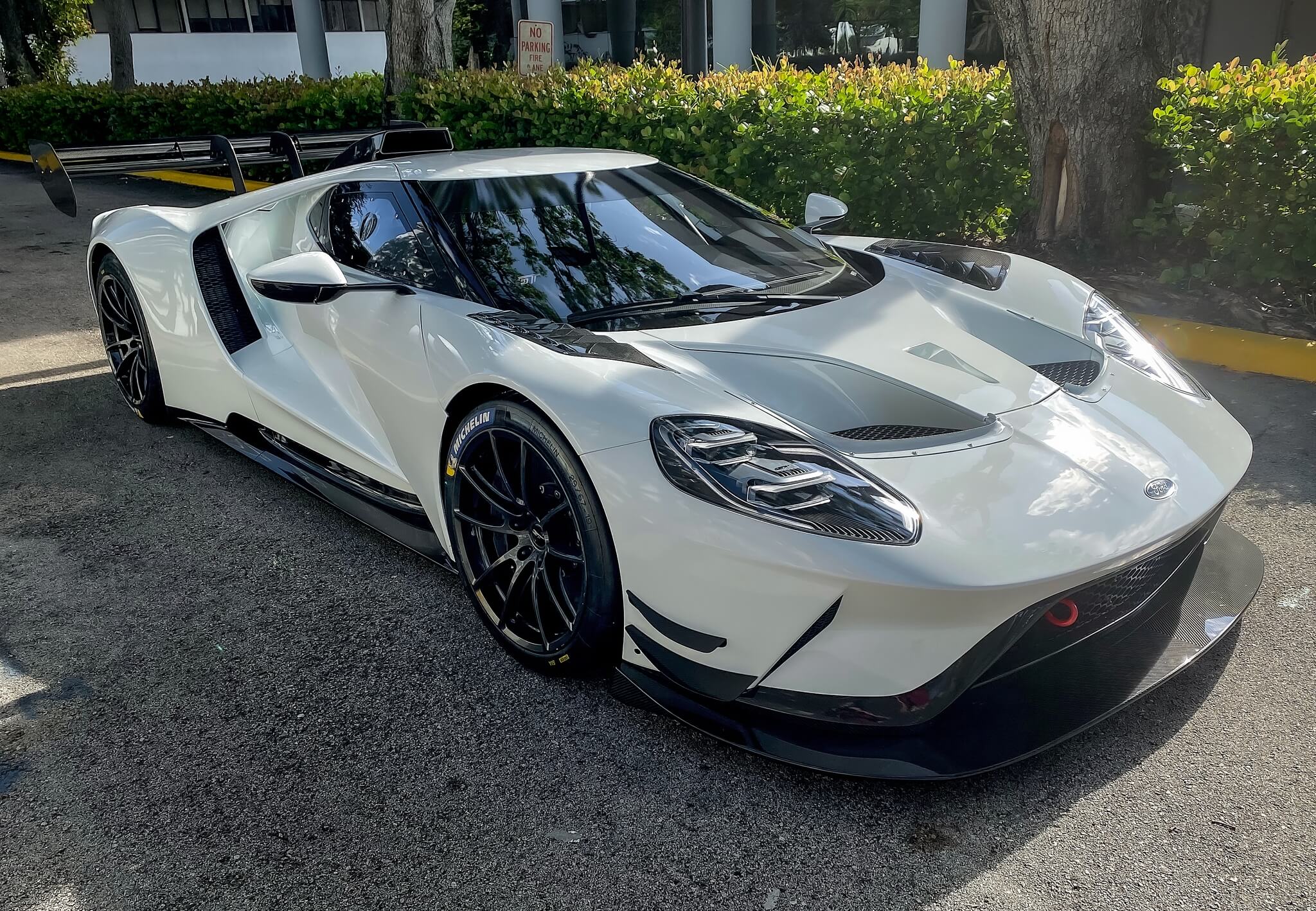 We are pleased to present this 2021 Ford GT Mk II.  Limited to only 45 vehicles in total over a three-year production run, the Ford GT Mark II was co-developed by Ford Performance and Multimatic based on Ford’s GT race cars that competed at the FIA World Endurance Championship, the IMSA WeatherTech SportsCar Championship, and 24 Hours of Le Mans.  Developed without series rules or restrictions, the Ford GT Mk II unleashes its full performance potential with aggressive aerodynamics and a 3.5L EcoBoost engine generating 700 HP, making it the most powerful GT Ford ever produced. Never driven since delivery, this new Ford GT Mk II features over $50k worth of add-ons and is now being offered for auction by its seller out of Florida.

The Ford GT was designed from its inception to compete at Le Mans, and the ultimate focus of the design team was to promote downforce and aerodynamic efficiency. The car’s teardrop profile mimics those usually seen on LMP1-class cars. A carbon-fiber monocoque chassis provides strength and structural rigidity, and aluminum front and rear subframes covered in carbon-fiber body panels help to reduce overall weight. The GT’s distinctive flying buttresses channel air around the canopy and over the rear spoiler, while side intakes feed air towards the intercoolers before pushing it out through the bullseye taillights. The Mk II version of the GT features aggressive and functional race-inspired aerodynamics including a gloss carbon-fiber front splitter with fender-mounted dive planes, gloss carbon-fiber fender louvers, new underfloor channels, a large rear gloss carbon-fiber wing, and finned gloss carbon-fiber rear diffuser borrowed from the Ford GTLM race car. These additions provide a 400% increase in downforce compared to a road-going Ford GT, amounting to 1900 lbs. of downforce in total. In conjunction with its racing suspension, forged 19” aluminum wheels, and Michelin Pilot Sport GT racing tires, the GT Mark II can sustain over 2Gs of lateral grip. 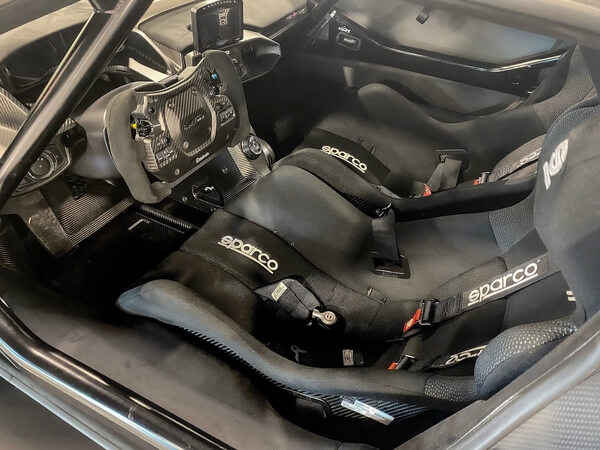 The interior of this Mk II features custom carbon-shelled FIA-certified Sparco seats with matching racing harnesses, unique carbon-fiber dash moldings, a fire suppression system, and an FIA-compliant Chromoly full roll cage. An F1-style Multimatic carbon-fiber multifunction steering wheel sits in front of a 10” digital instrument screen that displays a speedometer and tachometer alongside oil temperature and pressure, coolant temperature, and boost. A MoTec data acquisition system provides vital information for the driver and doubles as a display for the rearview camera. 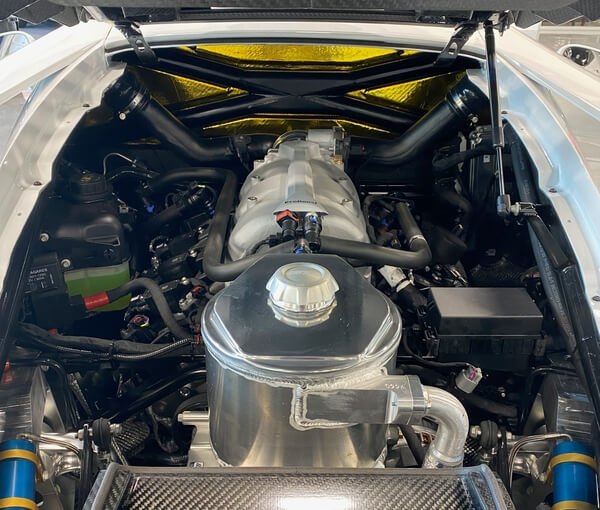 The Ford GT Mk II is powered by a twin-turbocharged 3.5L EcoBoost V6 engine rated at 700 HP, an increase of 200 HP over the factory GTLM race car. Power is delivered to the rear wheels through a Getrag 8-speed dual-clutch transmission and a limited-slip differential. Stopping power is handled by Brembo carbon-ceramic brakes measuring 15.5 inches in the front and 14.1 in the rear, with a retuned Bosch anti-lock braking system. The removal of the electronically adjustable suspension saves approximately 200 lbs. over a standard Ford GT and is replaced with 5-way adjustable Multimatic DSSV two-stage dampers with high-speed blow-off and fixed-rate springs. Also specific to the Mark II are unique billet-machined uprights and redesigned tie-rod ends. To handle continuous track usage, the Mk II adds innovative engine cooling technology including a high-capacity air-to-air outboard mounted charge cooler with an ionized water spray that automatically activates during high-temperature situations. The roof-mounted GT-style scoop air cooler system delivers fresh air to the gearbox, oil system, and clutch. Other race-inspired options selected include an onboard air jack system ($18,000) along with safety stands and skates for moving the vehicle around the paddock. This Mark II will also come with an additional set of wheels, a cooling suit, and a Mk II-specific code reader. 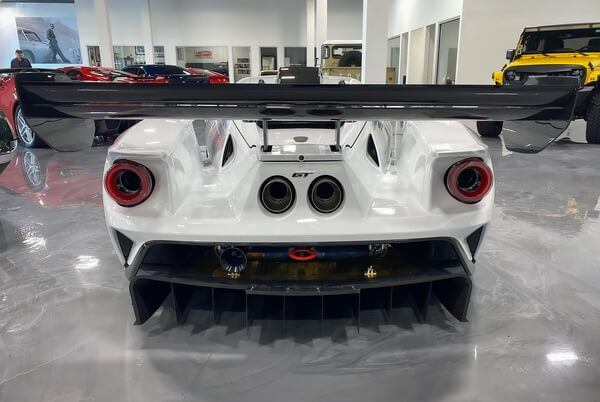 Please note that this car is intended for the track only and may not be registered for street use. With only 45 examples to be produced in total, the Ford GT Mk II presents a highly exclusive opportunity for demanding drivers in search of the ultimate track-going experience.