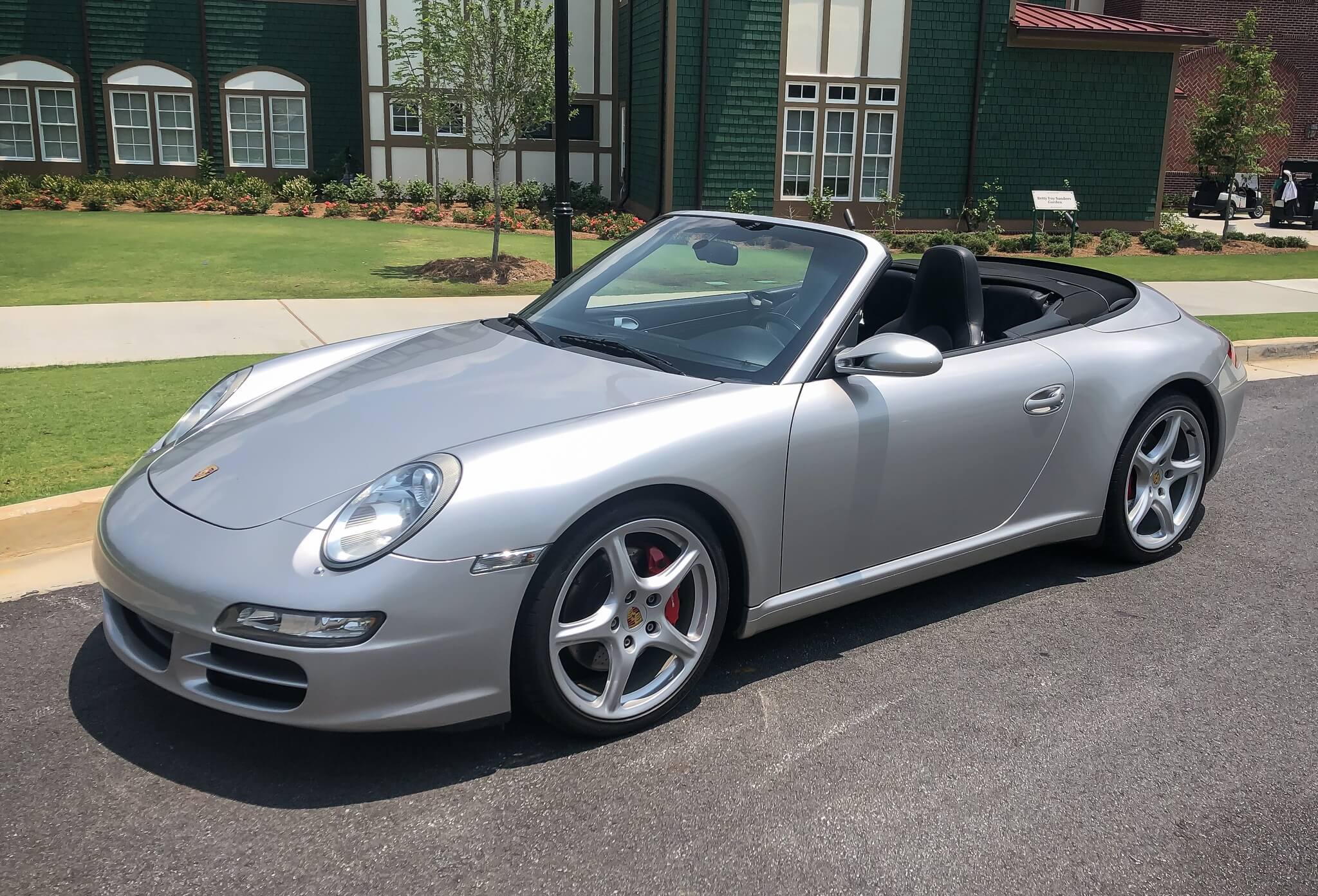 Up for auction is this 2006 Porsche 997 Carrera S Cabriolet finished in Arctic Silver Metallic over a black full leather interior.  In addition to its premium factory options, this 6-speed Carrera S has been equipped with a completely rebuilt 4.0L engine by Flat 6 Innovations. This powerful, high-revving naturally aspirated engine was installed within the last 5k miles and features an IPD intake plenum as well as the Jake Raby IMS bearing solution.  Currently showing approximately 46k miles on the odometer, this 4.0L 997 Carrera S is being offered for auction by its second owner out of Georgia. 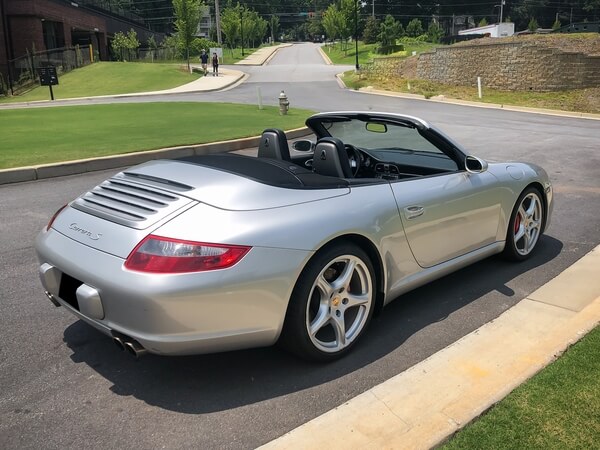 This Carrera S comes finished in Arctic Silver Metallic with a black power-operated Cabriolet top.  Under the current ownership, the top mechanism has been serviced with a new hydraulic pump and rebuilt actuators.  Clear paint protection film has been applied over the front end and the seller reports a scratch on the right rear bumper, additional images are provided in the photo gallery along with a clean CARFAX report.  This 997 rides on factory optional 19” Carrera Classic wheels with colored Porsche center crests and Hankook Ventus V12 Evo2 tires dated from 2017. 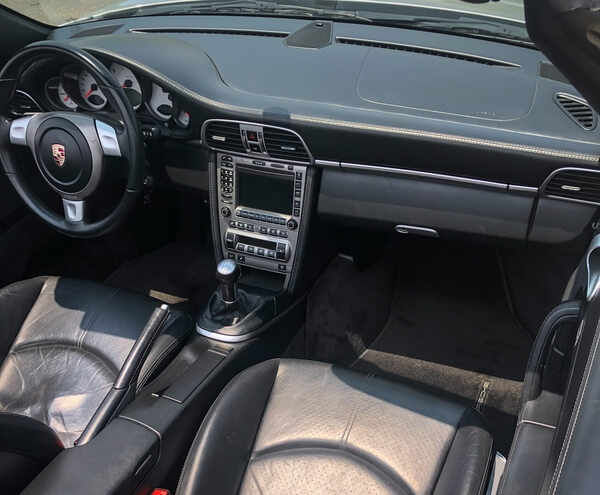 Inside, the Carrera S highlights a premium black full leather interior with heated Sport Seats, the Bose High-End Sound Package, and a PCM telephone module.  New climate control knobs have been fitted and the seller describes the cabin to have been kept in very good condition apart from some wear depicted on the driver's seat. 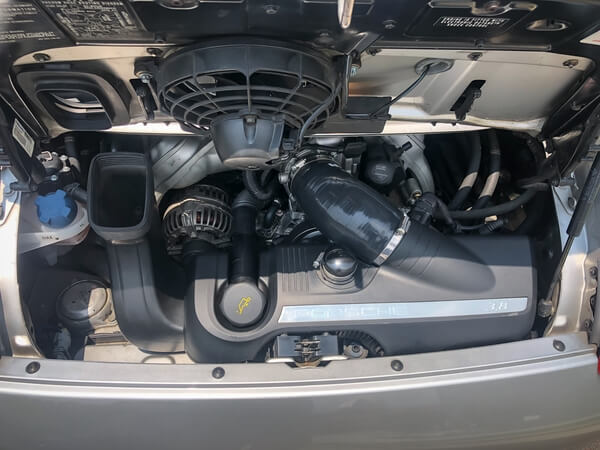 The naturally aspirated 3.8L flat-six engine of this Carrera S has been completely rebuilt by Flat 6 Innovations and upgraded to a 4.0L displacement.  The engine has also been equipped with an IPD intake plenum, Jake Raby’s IMS solution and bearing upgrade, a new clutch, and a new coolant tank.  The rear wheels are driven by way of a 6-speed manual transmission.  The engine build was completed within the last 5k miles and Flat 6 Innovations recommends a break-in period of 7,500 miles.  The seller reports that routine Liqui Moly oil changes have been carried out during their ownership as well as a transmission fluid change using Swepco 201 gear oil. Images from the engine build are provided in the gallery along with an invoice showing a cost of $32,500. 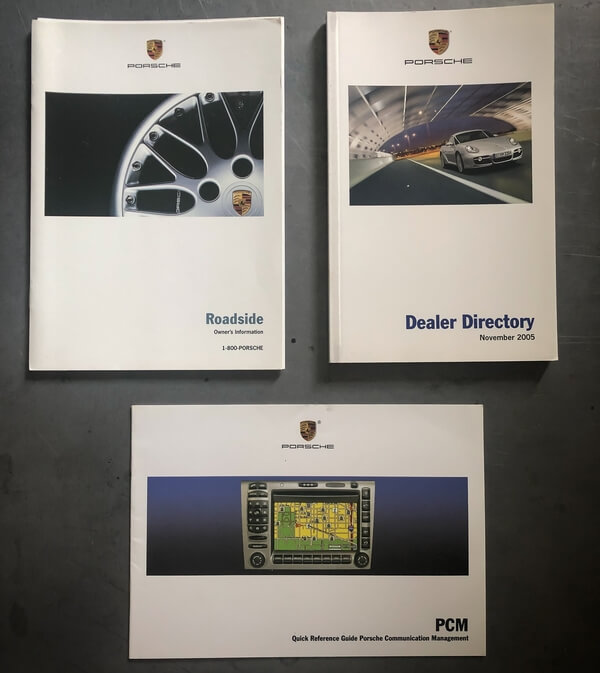 This sale will include some invoices, the original owner's manuals, a set of two keys, and a clean title. With its understated appearance and upgraded 4.0L flat-six engine, this 997 Carrera S makes an excellent choice for any discerning driver in search of a 6-speed Cabriolet.