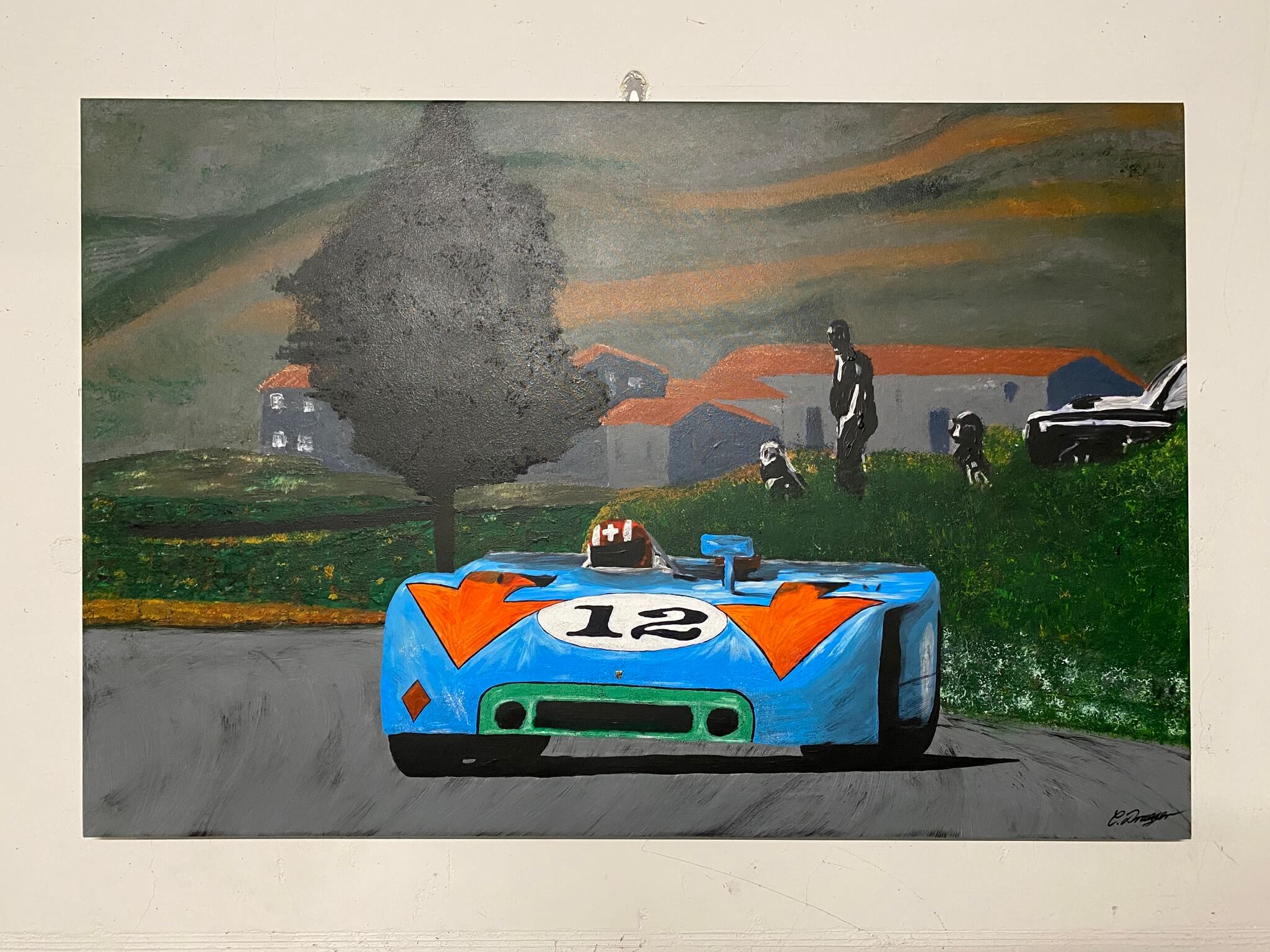 Available for auction is a stunning piece of art by DCart. This unique work of art with the title "orange arrows“ was painted with exactly that passion that is in this race, this race car, and this era of motorsport. The scene that was painted is exactly that: the Porsche 908 thunders at full throttle through the picturesque landscape of Sicily - admired by the residents standing directly on the route. A time of motorsport that one likes to remember and dreams of having been there. This unique piece stands for exactly that. Due to its very large size, it enriches every room and causes fascination and admiration. Not just for Porsche fans, but for viewers in general. The 59" x 40" large painting is made on a high-quality canvas and is 1.6" thick. Finally, the painting was again covered with a "varnish" to enhance the power of the colors and at the same time to protect the picture from external influences. 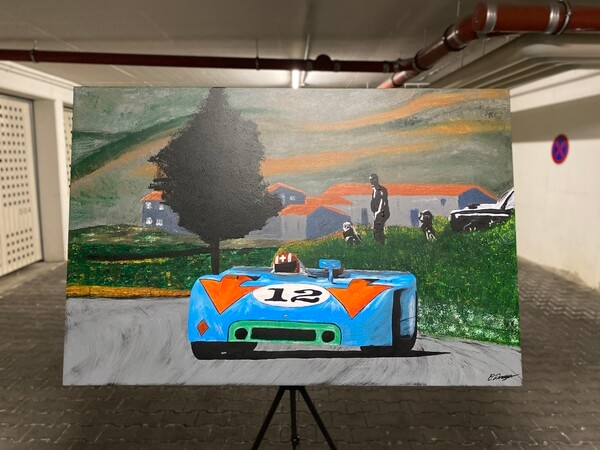 Porsche 908/3 triumphs at the 1970 Targa Florio with Jo Siffert/Brian Redman (CH/GB) at the wheel. Was it heroes or lunatics who set out for Sicily every year in search of fame and glory? "Lock up children and pets!" was the vital command in the days of the legendary "Targa Florio". The 72 km long lap was one of the toughest that a track could demand from a racing driver. "And you're never sure whether there won't be a donkey cart blocking the road behind the next bend when you're driving at the limit," said Jo Siffert at the time, describing the risks. And then the village crossings: spectators formed lively crash barriers, racing cars thundered by just a few centimeters away, looking for the ideal line. Today's race on one of the unfortunate test-tube routes looks like a coffee ride! 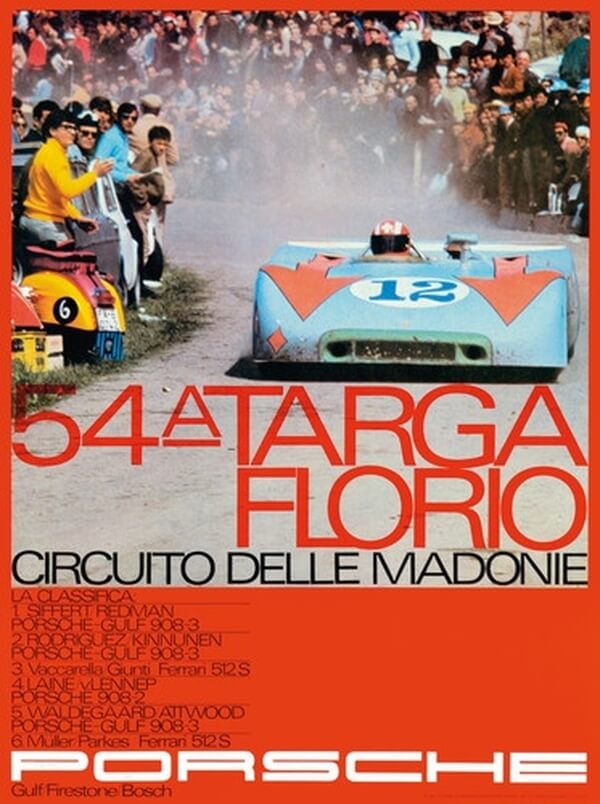 Targa Florio - a race that must be mentioned in the same breath as Le Mans, Nürburgring or Mille Miglia. The 1000-kilometer race in Sicily separated "boys" from "men". Very few cracks managed to memorize the demanding 72 kilometers. Almost as planned on the drawing board, Jo Siffert in the Porsche 908/3 with starting number 12 is the fastest in qualifying. The stopwatch stops at 34:10 minutes, resulting in an average speed of 126 km/h. Nevertheless, a Ferrari was the first to take to the track on Sunday. At 9.14 a.m. Herbert Müller in the Filipinetti 512 S engaged the clutch. In the official time interval of 14 seconds, Vaccarella follows him in the works Ferrari 512 S. In the third position, another 14 seconds later, Jo Siffert in the 908/3 presses the gas pedal in the direction of the floor panel and plunges into the Targa Florio 1970 adventure. The Targa Florio was still there never a race for gentleman drivers. Full throttle in 70s racing cars, an aluminum bowl riveted together, surrounded by petrol, flying over Sicilian country roads, the potholes have that a whole Fiat 126 Bambino could disappear in them, you just need more balls for that than on a test-tube circuit. For Alfa Romeo, the 1970 Targa Florio became a debacle. All three Alfa Romeo T33/3 are eliminated due to accidents. Even the remaining Abarth cannot keep up with the pace of the Ferrari 512 S and the Porsche Armada. After the first driver changes, Vaccarella leads ahead of Redman and Rodriguez. He only drove two laps because he fell ill during the night and lost a lot of time on the Ferrari. So Kinunnen gets back behind the wheel of the Porsche 908 and revs it up. In the final phase, he races across the island in one record lap after another. He can still intercept the Vaccarella Ferrari and push him into third place. On his last lap, he etched the record time of 33:36.000 minutes into the heated asphalt of Sicily. A time that will never be broken again in the history of the Targa Florio. This means that around 1000 meters in altitude and 900 curves were driven at an average speed of 128 km/h. But even he was no longer able to prevent victory in the Porsche 908/3 with number 12 at the Targa Florio in 1970. After the last pit stop, Jo Siffert has a clear lead over Giunti in the Ferrari. In the end, only five vehicles out of more than 90 starters are still in one lap. Including all four Porsche 908/3, which were created especially for the Targa Florio 1970 in record time. 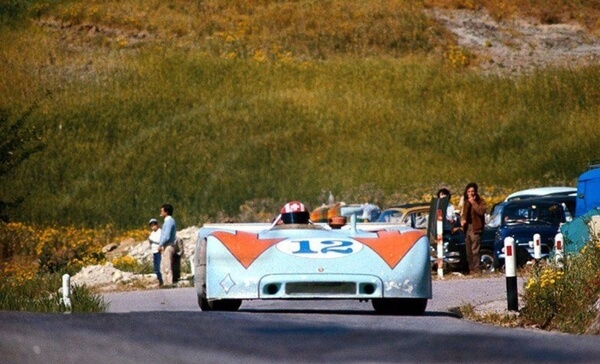 Behind the synonym DCart is Christopher Draeger, born in the 1980s in Friedrichshafen, Germany at Lake Constance. Due to the early entry into active motorsport and stations at the renowned German car magazine "auto motor und sport" and Porsche, there is more than enough petrol in his head. But since early childhood, art and creative work have been the second great passion in his life. Thanks to his mother, a studied art teacher, professionalism came more and more into his work, which now includes several hundred individual pieces and inspires sports car and motorsport fans worldwide. Customers now include the Arabian royal family, Porsche 918 customers, and Mercedes 300SL Gullwing owners, as well as customers on all continents of the world. Included with the work is a certificate of authenticity with all details about the work of art. The shipment of the works of art is always very well secured, protected, and always insured. The buyer is responsible for shipping, handling, and fees.