"The One and Only RSR" Painting by Michael Ledwitz 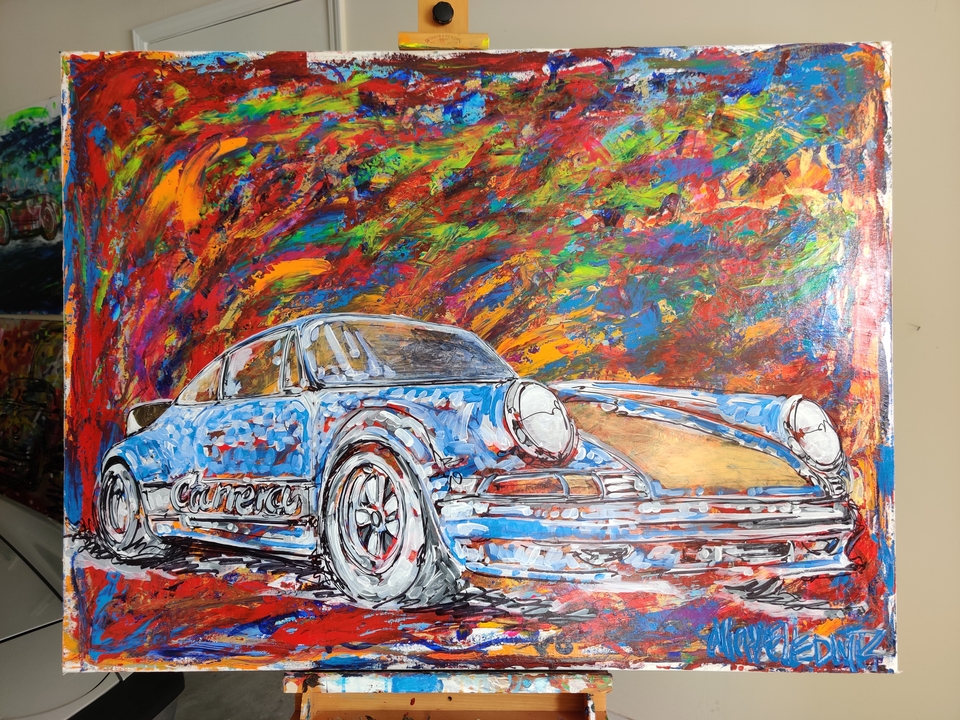 Available for auction is an original painting by artist Michael Ledwitz. This original painting, "The One and Only RSR" displays the beautiful lines and shape of the iconic 1973 Carrera RS. In 1973 Porsche released the Carrera RS road car as means of homologating their championship winning RSR for Group-4 racing. With a team like Brumos behind the operation and drivers Peter Gregg and Hurley Haywood behind the wheel, the Porsche RSR dominated its first race of the season at the 24 Hours of Daytona. This victorious fashion would continue during the season into the Targa Florio with factory backed Martini Racing. Later that season, the RSR was modified with a 3.0 engine to compete in the 24 Hours of Le Mans. This 3.0 powerplant stuck with the RSR for the 1974 season where it dominated the Group-4 racing series through independent teams likes Kremer Racing. This original painting is crafted in mixed acrylic on canvas with pallet knife on the background and brush on the car and measures 36" x 48".

Michael Ledwitz is known for his abstract style similar to Peter Max and LeRoy Neiman featuring bright colors while this particular piece has influences from Chuck Close thumbprint paintings. His love for the arts started with drawing cars at a very young age and was inspired from Hot Wheels. Michaels art is coveted in the automotive industry and has led to many high-level pieces including the artwork done for Carrol Shelbys 85th birthday celebration. Michaels professional career in automotive art started after he was in a near fatal car accident in 2005. He was forced to slow down from work in franchising in order to heal. His painting began as a hobby; a way to relax and reflect. Soon after, people started to notice Michael’s talent and began requesting commissioned pieces of their own. Since then, Michael’s accomplishments include silent auction pieces for Zoo Atlanta, commissioned paintings for Carroll Shelby’s 85th birthday in Las Vegas, Shelby Licensee, and he was the featured artist for this year’s Atlanta Concours ‘d Elegance at Chateau Elan. More on artist Michael Ledwitz can be seen in the video below. This original and one-of-a-kind automotive art piece will make for a wonderful addition to any automotive enthusiast / art collection.

"The One and Only RSR" Painting by Michael Ledwitz
Final bid: $1,699 This auction has ended.
  SEE RESULTS